News: Citizen Scholars Going Above and Beyond

Sometimes, the citizen scholars who volunteer their time to German Heritage in Letters truly exceed our expectations and conduct their own research to shed light on the people and places mentioned in the letters they are studying. Two members of the transcription group from Saarland we profiled previously, Eva Tietjen and Regina Kunz, embarked on this path to learn more about the family networks surrounding Charlotte Fischer von Höfeln and Eugen Klee, two immigrants whose letters are included in our collections. We asked them both additional questions to find out more about their motivations as well as the results of their commitment.

Eva Tietjen conducted further research online into the authors of the Höfeln letters as well as other people mentioned in them. She was able to find the full names for many individuals and their genealogical information, annotated the letters, and created expansive family trees for four of the most relevant families.

1. What prompted you to go beyond transcribing the letters and pursue research into the people mentioned in them?

I found it remarkable that the collection of letters covered a period of 46 years (1851 to 1897). The letters sent to Charlotte Fischer von Höfeln—Lotte to her family—stemmed from several different senders, mostly her sisters and cousins from her home community, Kirchheim unter Teck.

The relationship between the different family names was not immediately clear. What’s more, the letters repeatedly contained remarks or references to other people within the family.

Thus, I was prompted to explore two aspects: first, I wanted to establish connections between the individual families or individuals. This led to annotating the letters to track mentions of different family members, and to finding their dates and places of birth (or death). Second, I tried to establish a complete overview of the genealogy. This research resulted in family trees of the Fischer, Tritschler, Enslin and Finckh families, as well as the supplementation of the personal data to create a complete guide to the Höfeln family circle.

2. What resources did you use for your research? Were there any particular difficulties?

The family research was conducted using a number of internet portals, including geneanet, familysearch.org, GenWiki’s virtual library and Ancestry.de. I couldn’t find every piece of data I sought. I created the family trees using genealogy software.

3. Did your experience exploring your own family history help you in researching the people in the Höfeln letter collection?

I can answer this question with a resounding yes. I have been engaged in researching my ancestors for a very long time. Since many of these ancestors lived in France, I had to use various internet portals in my research (fortunately, many original records can be accessed online now). As a result, I have developed a certain routine that has also helped in researching the people in the Höfeln letter collection. Also, I have always had an interest in research and investigation, regarding both history and genealogy. 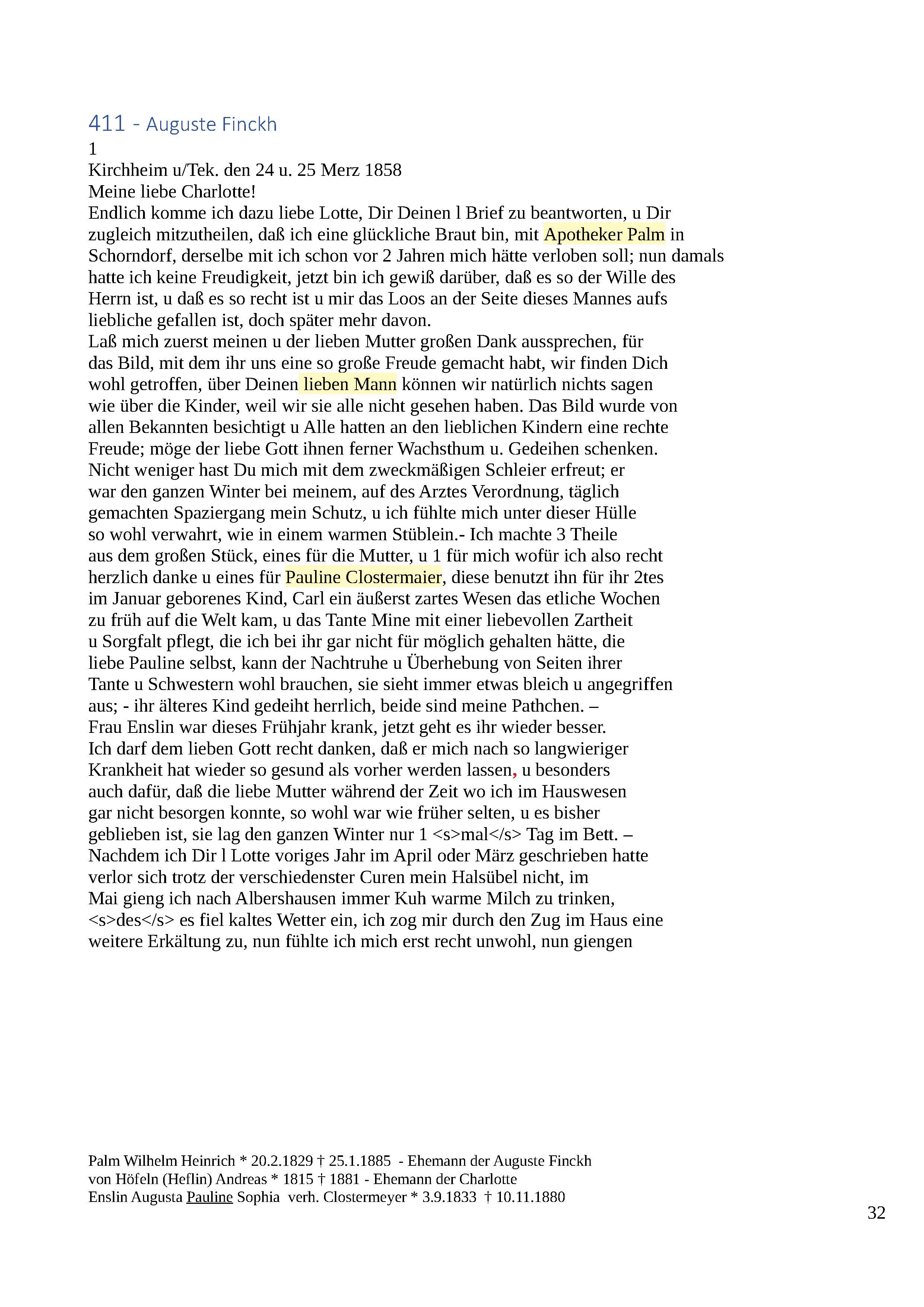 An example of a letter from the Charlotte Fischer von Hofeln collection annotated by Eva Tietjen.

Example of a family tree developed by Eva Tietjen as part of her research into the background of Charlotte Fischer von Hofeln's family.

Regina Kunz took a different approach. In addition to helping to transcribe the Höfeln collection, she has been participating in the weekly Transcription Tuesday events hosted by the Horner Memorial Library of the German Society of Pennsylvania. With that group she has been helping to transcribe letters received by Eugen Klee, a Philadelphia choir leader who immigrated in the 1890s, from his family and friends in Germany. Klee was a native of Otterberg, in Rheinland-Pfalz, not far from her home in Saarland. She decided to visit Otterberg and some of the other nearby communities where the letters originated.

1. What prompted you to visit Otterberg?

Otterberg is only a good half hour's drive from where I live. We had been working on letters sent from Otterberg for weeks and so I just wanted to know what kind of place Otterberg is.

2. Which places did you visit in Otterberg? What connection did they have to the letters?

I went to the town cemetery and visited the Klee family grave. A letter in the collection shows that Eugen Klee bought the grave in 1921, probably to reunite his family in Otterberg after his death. However, the letters also show that a conflict erupted over the grave: Eugen Haas, a nephew of Eugen Klee, wished to transfer the remains of his mother Amalie Haas (Eugen Klee’s sister) to the family grave, but his father initially denied him permission. Although the reburial eventually took place, there was a rift between father and son, and Eugen Haas was disinherited. Eugen Klee in turn complained in a letter that the family had not shown him enough appreciation for his purchase of the grave.

Afterwards, I walked around the city a bit. I also looked for, and found, the house shown on the postcard sent to Eugen Klee in August 1920. This house has no relation to Eugen Klee, but it was the only clue to a specific place in Otterberg that appeared in the letters. I also like to photograph old buildings in their present condition.

3. Do you look at the letters differently now?

I didn’t learn anything new, but I had a very interesting talk with the head of Otterberg’s historical society about the community’s history. They are certainly aware of Eugen Klee as a famous “native son” and even had a copy of a short biography of Klee available.< 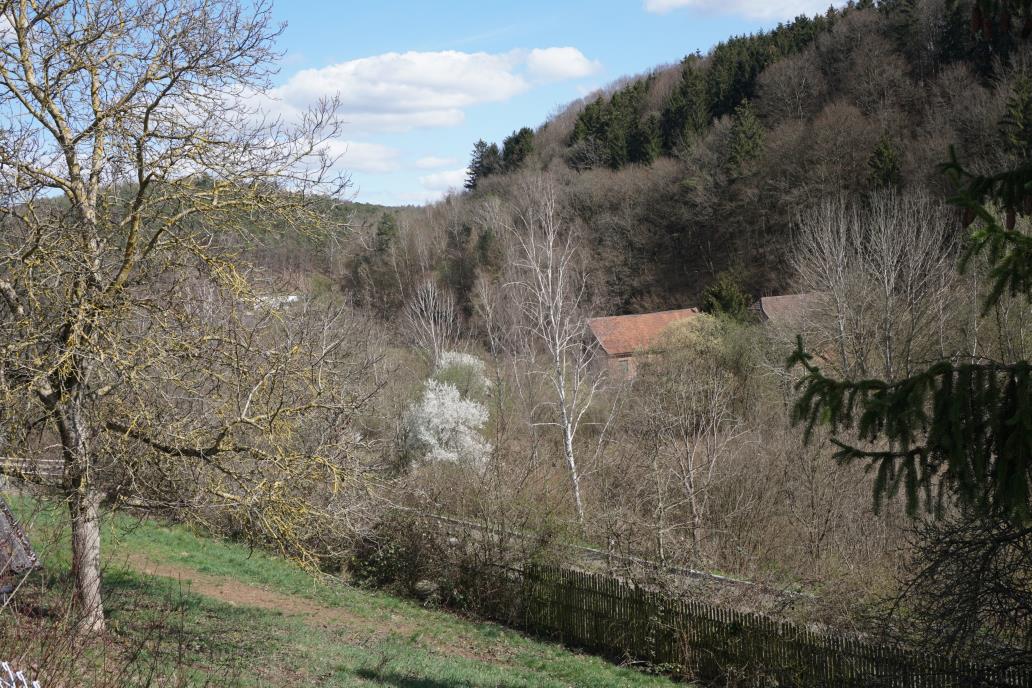 The funeral monument of the Klee family in the Otterberg cemetry. Photograph courtesy of Regina Kunz.

Our thanks to Eva Tietjen and Regina Kunz for discussing their research experiences as citizen scholars with us!