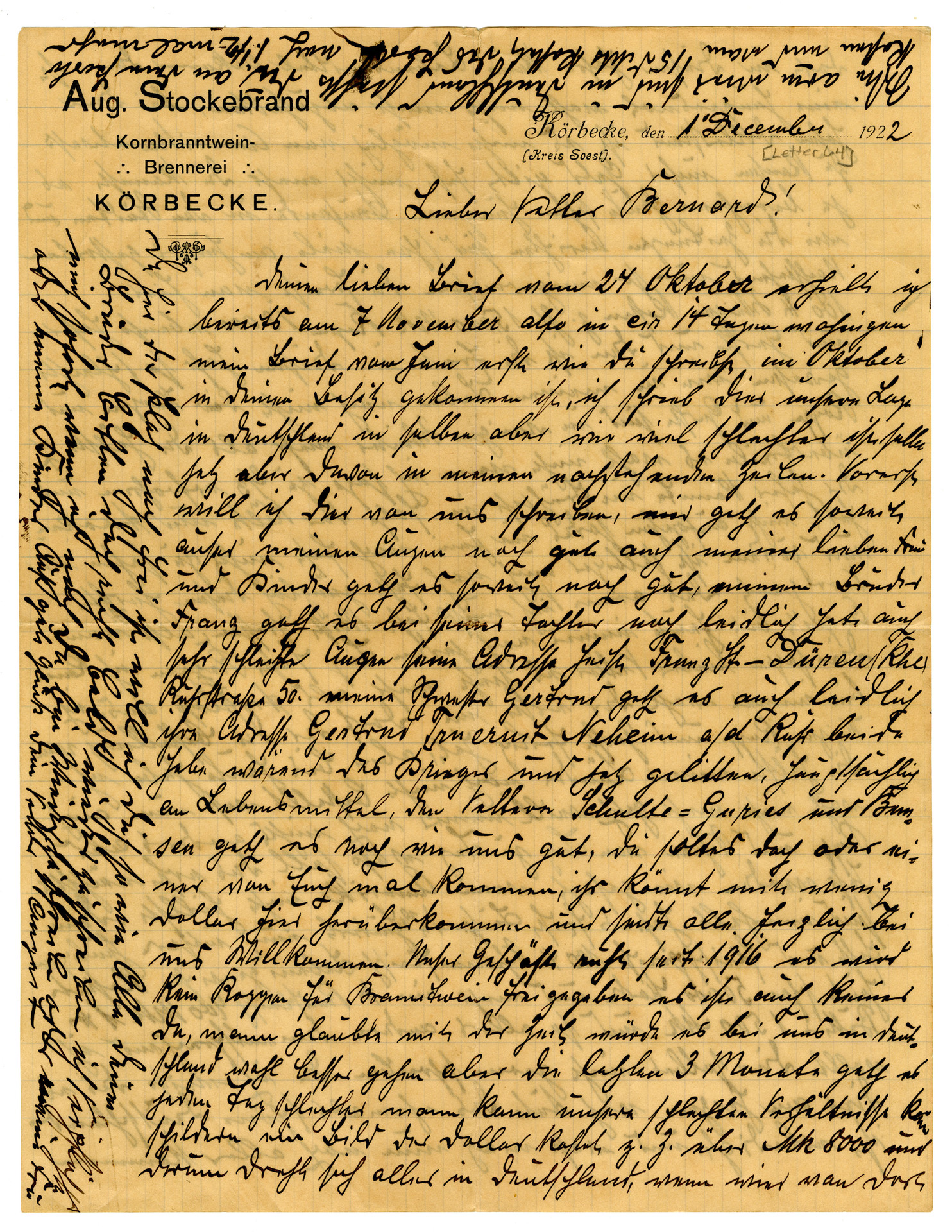 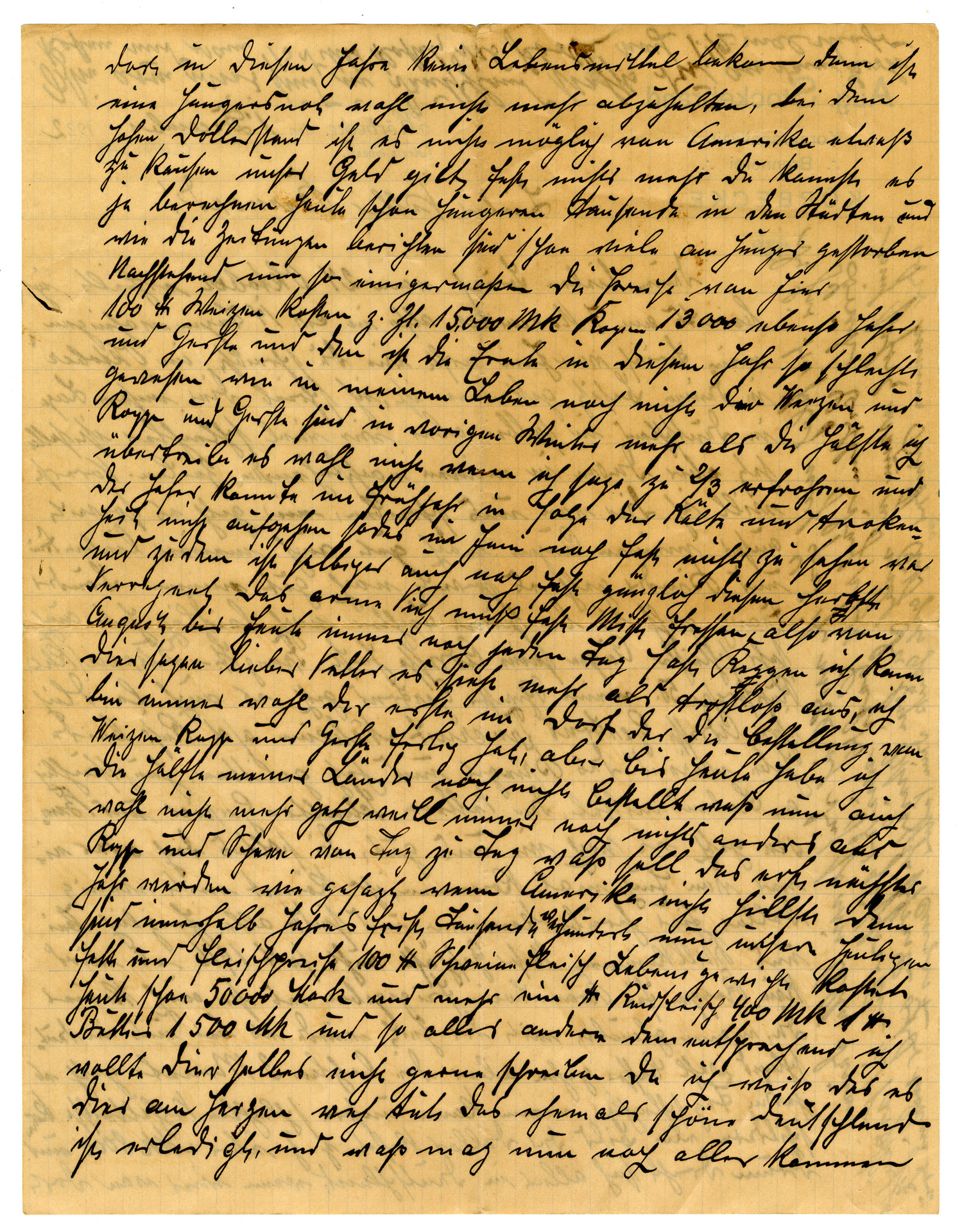 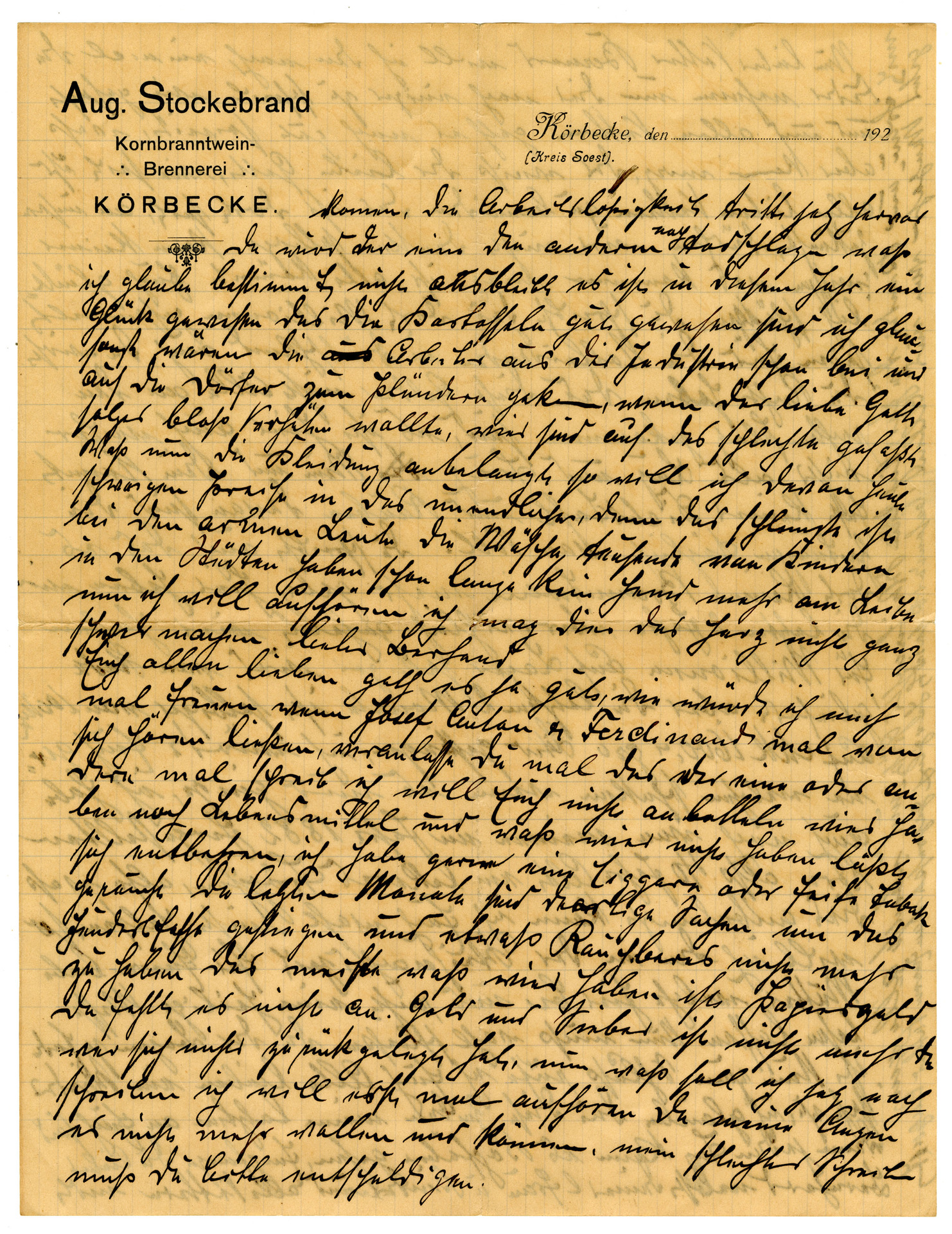 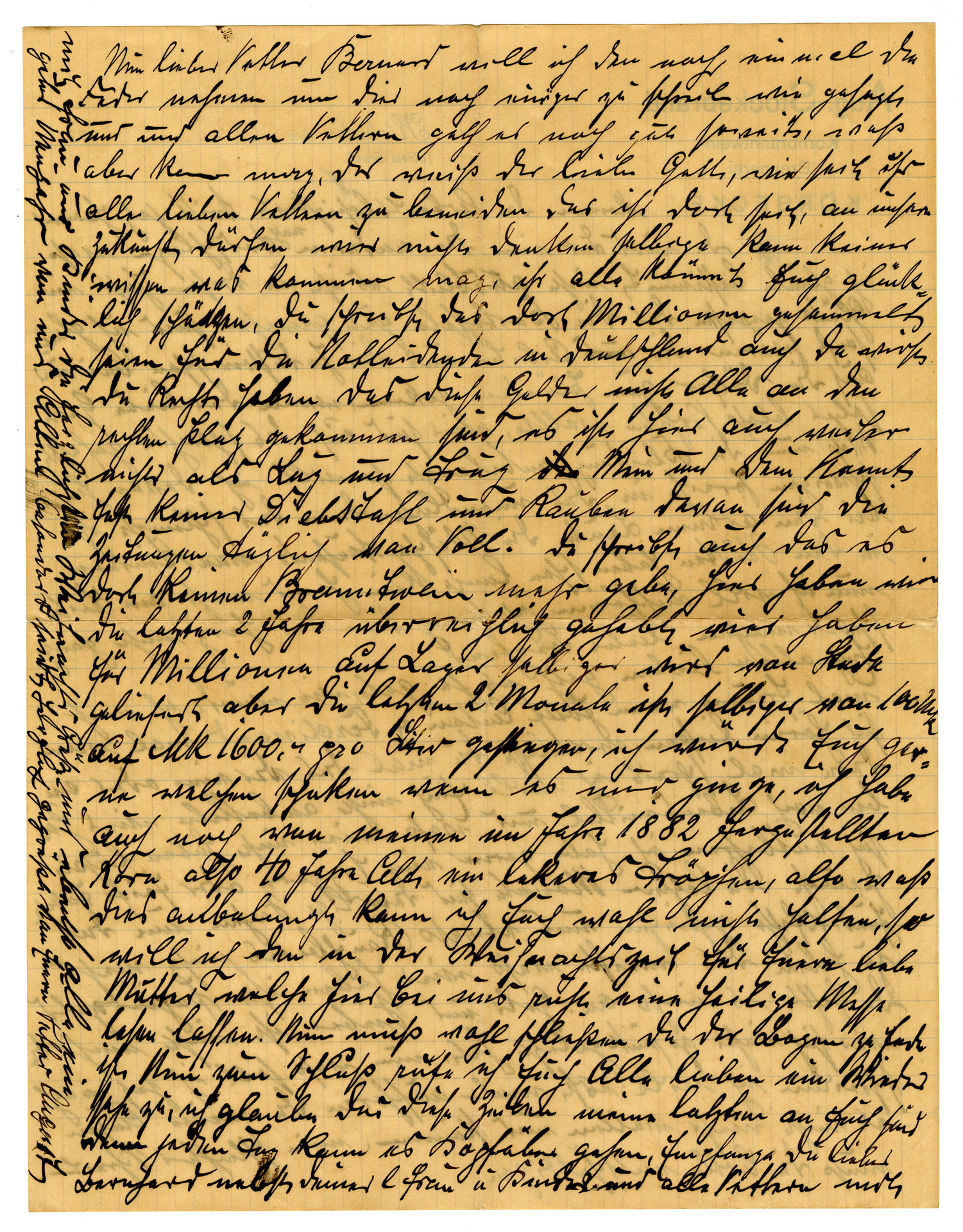 Your dear letter of October 24 arrived here 14 days later, on November 7. Where did my June letter go? You wrote that you received it in October. In it I wrote to you about our situation in Germany, but the situation is much worse now. But, more about that later. First I want to write to you about us. I am still well so far except my eyes, and my dear wife and children are also doing well. My brother Frank is living with his daughter and is faring tolerably well, he also has poor eyesight. His address is Frank H., Dueren/Khe.., Ruhrstarasse 50. My sister Gertrud is also tolerably well. Her address is Gertrud Truerest, Neheim a/d/Ruhr. Both have suffered during the war and are still suffering, mainly from lack of food. The Cousins Schulte = Garies and Bemsen are doing well, like us. They, or one of you, should come for a visit. You can come over here at my expense and you are all most welcome here.

Our business has been idle since 1916. No rye is released for making whiskey, nor is there any to be had. It was believed that in time things would get better for us here in Germany, but things have been going from bad to worse during the last three months. Our bad conditions are almost indescribable. A dollar costs over 8000 marks at this time, and all of Germany hinges on that fact. If we don't get any food from there this year a famine probably cannot be avoided. With the strong dollar it is impossible to buy anything from America. Our money buys practically nothing. It's not hard to figure out.

Today, thousands in the cities are going hungry, and the newspapers report that many have already starved to death. Now, in part, the following prices from here. One hundred pounds of wheat cost 15,000 marks at this time. Rye, Oats and Barley are 13,000 marks. Add to that that the crop this year is the worst in my lifetime. One half to two thirds of the wheat, rye and barley - I'm not exaggerating here - froze last winter, and the oats didn't come up in the spring because of cold and drought, so in June there was still nothing to be seen. On top of that, what did grow was rained out in the fall. The poor cattle are practically down to eating manure, and August up until now there is rain almost every day. I can tell you, dear cousin, things appear to be more than discomforting. I am probably always the first man in the village to be finished with the planting of wheat, rye and barley, but up until now half of my land is still not planted and it is getting too late to do so because there is always nothing but rain and snow every day. What will things be like next year? As I said, if America doesn't come to our aid thousands of people will starve.

And now, our prices for fat and meat. 100 pounds, live weight, of turkey meat already costs 50,000 makes or more. A pounds of beef costs 400 marks, a pound of beef costs 400 marks, a pound of butter, 1,500 marks, and everything else is proportionately high. I really didn't want to write to you about this since I know it is heartbreaking for you. Germany, once so beautiful, is now laid low, and what else might be yet to come?

Unemployment is spreading further now, so that I think it will come to people killing each other. It was fortunate this year that we had a good potato crop. Had that not happened, I believe that industrial workers would already have come to plunder the villages inside and out. If only our dear God will protect these people. We are ready for the worst. I will remain silent today about clothes, the cost of which keeps going up. It is worst among the poor folk. Thousands of children in their huts have long since not had a shirt on their back. Now I will stop. I might break your heart, dear Bernard.

Of course, all is well with all of you. How glad I would be if Josef, Anton and Ferdinand would let themselves be heard from for a change. Please urge them to write. I don't want to come to you a-begging; we still have food and we and we can get along without what we don't have. I have liked very much to smoke a cigar or pipe tobacco. In the last couple months, the price of those kinds of things has increased a hundredfold, and even so, smoking tobacco is no longer available. Mostly we have paper money and there is no lack of that. There is no more silver coinage unless one has laid some aside.

What else shall I write about now? I will quit because my eyes don't want to any longer, nor can they. Please excuse my poor handwriting.

Well dear Cousin Bernard, I will take pen in hand again to write about several matters to you. As I said, all of us cousins are still doing well, but God only knows what is yet to come. How all of you dear cousins are to be envied in that you are there! We don't dare think about our future and nobody can know what might be coming. All of you can consider yourselves lucky.

You write that over there millions are being gathered for the needy in Germany, and there, too, you are right in saying that these monies have not all been reaching their intended destination. Here, too, it is nothing but a pack of lies. Practically no thieves and robbers understand anything about what is mine and what is yours, and the newspapers are full of it every day. You write that whiskey is no longer available there. We have had it in superabundance the last couple of years. It is supplied by the state, but in the last two months it has risen in price from 100 marks to 1600 marks per liter. I would gladly send you some if I could. I also still have some of my own corn liquor distilled in 1882 and therefore 40 years old, a delicious little drop indeed. Also, I probably cannot help you in this matter, so I will have a holy Mass read for your dear mother, who is at rest here with us.

Now I must probably close since the paper is full. In conclusion, I will bid all of you dear ones farewell. I believe that these lines will be my last ones to you, for things can go topsy-turvy at any time. My heartfelt Christmas greetings to you, my dear Bernard and to your dear wife and children, along with all of the cousins and their families, and to all of you a happy new year from all of us, especially from your cousin,

PS: Since I have a little space left here I will ask you, as well as all of your brothers, to write again soon. If I am still here I promise to write to you again personally or by my wife or my children. Good luck! Your cousin,

PPS: You can see how poor Germany is from the postage what used to cost 15 marks now cost 1 1/2 times as much. 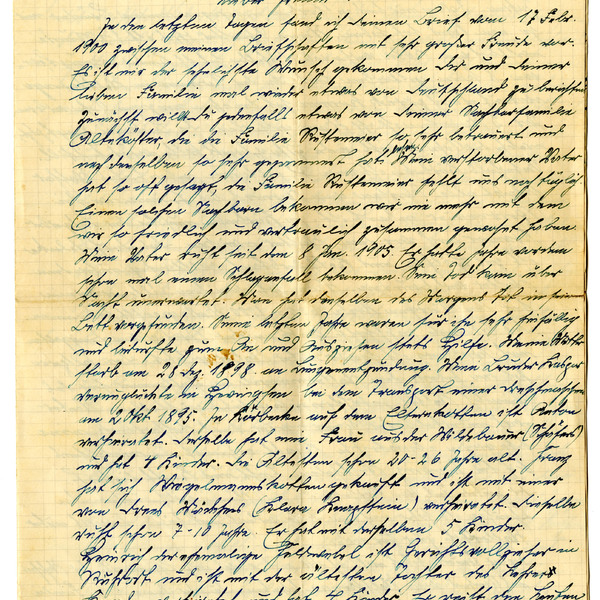