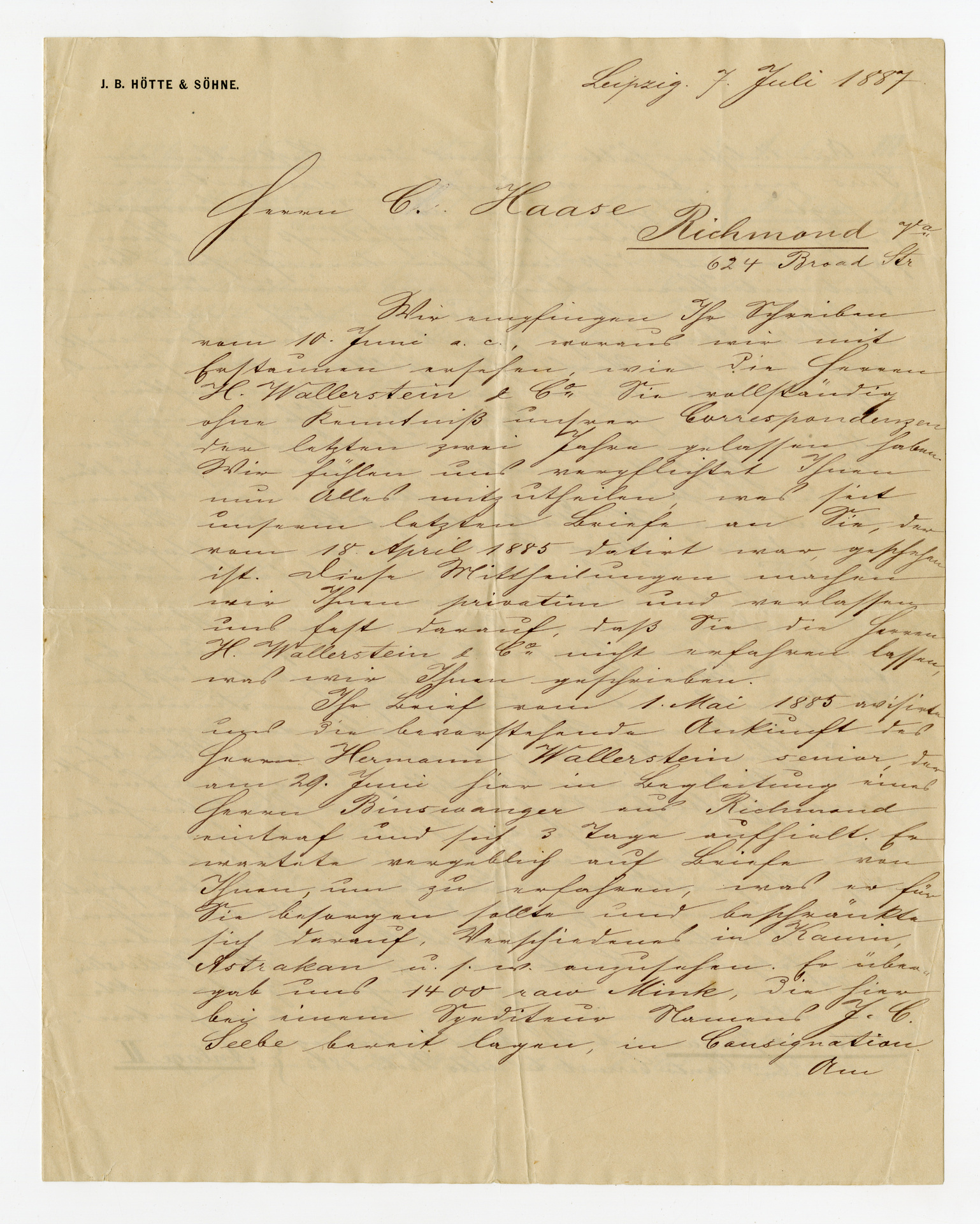 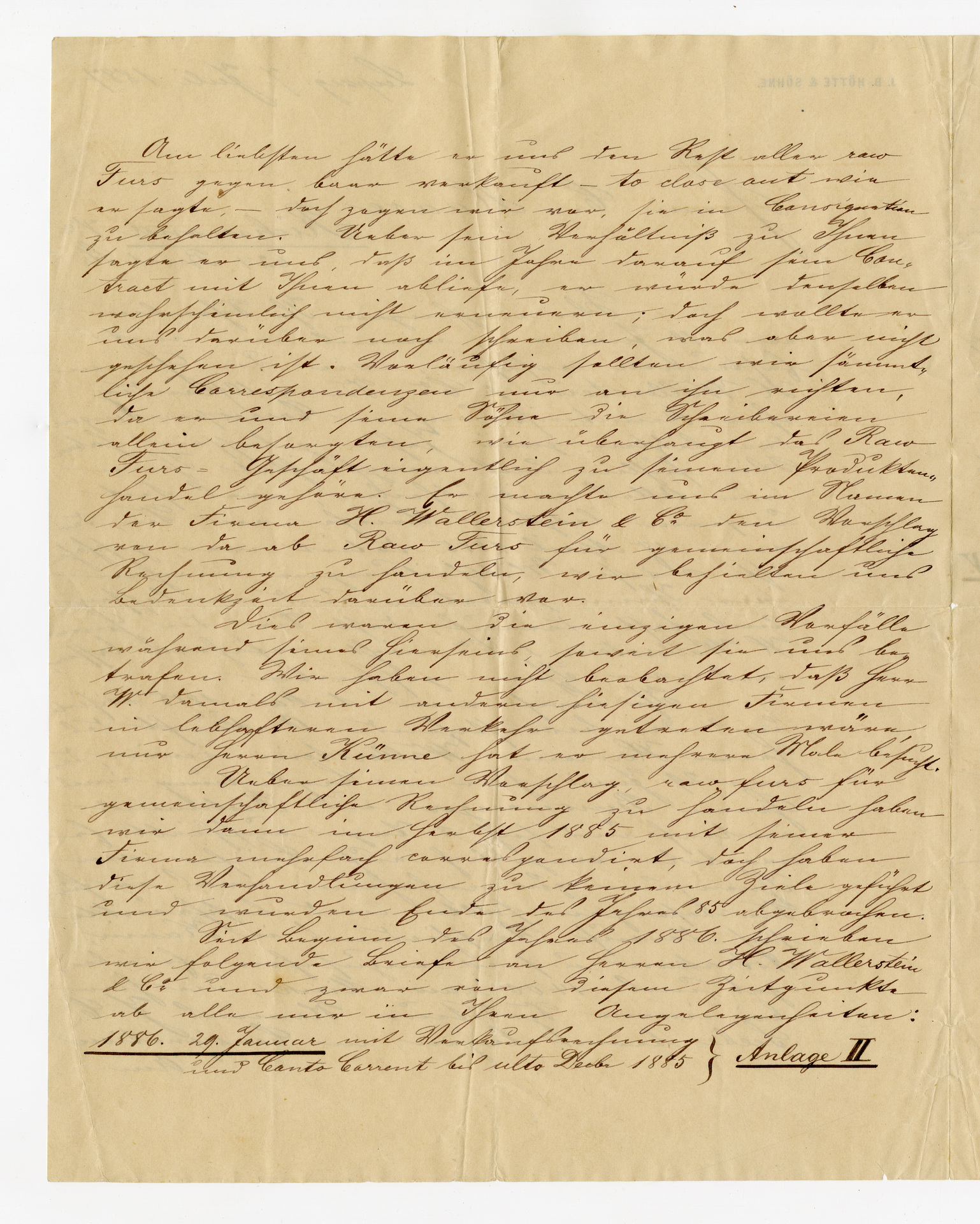 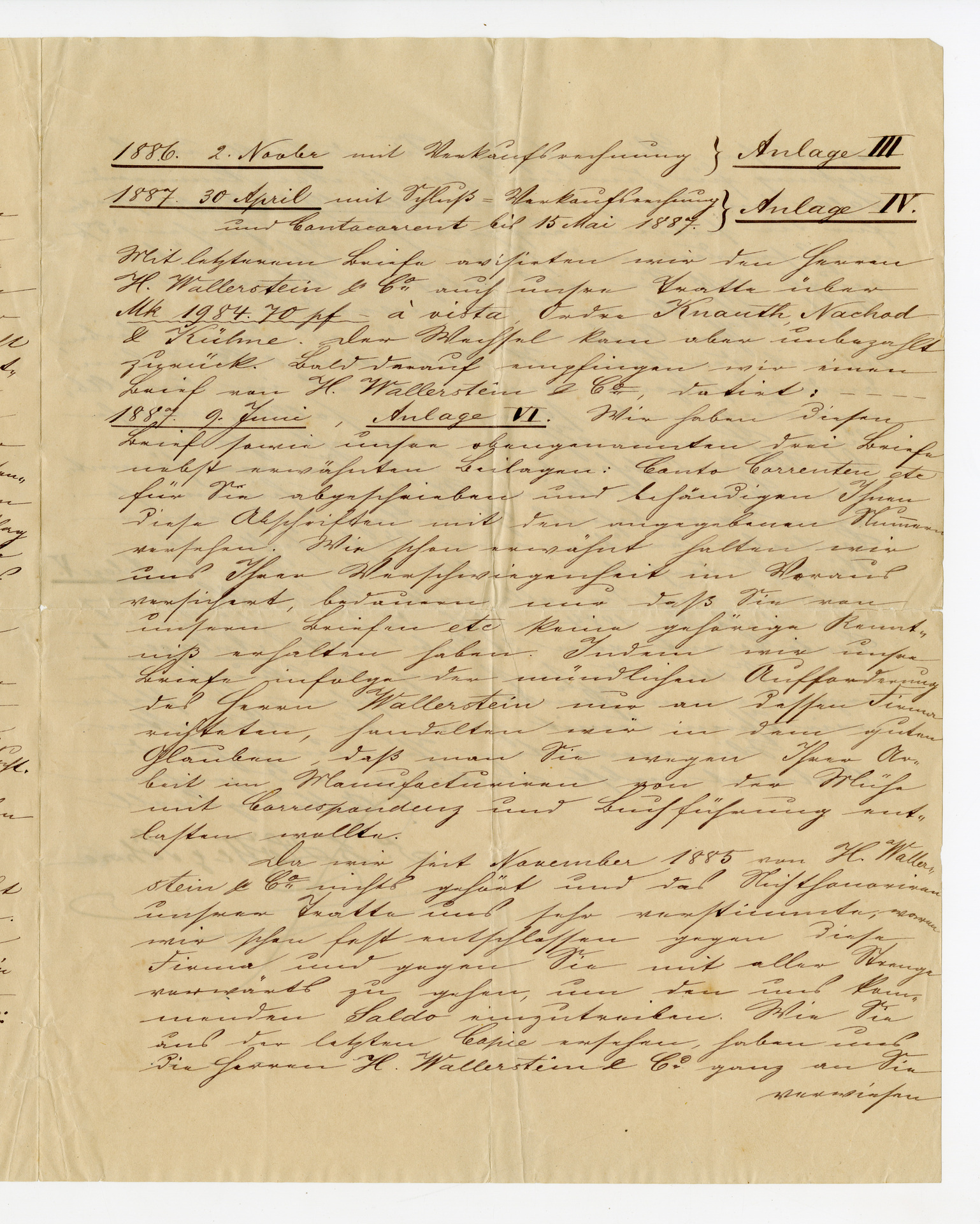 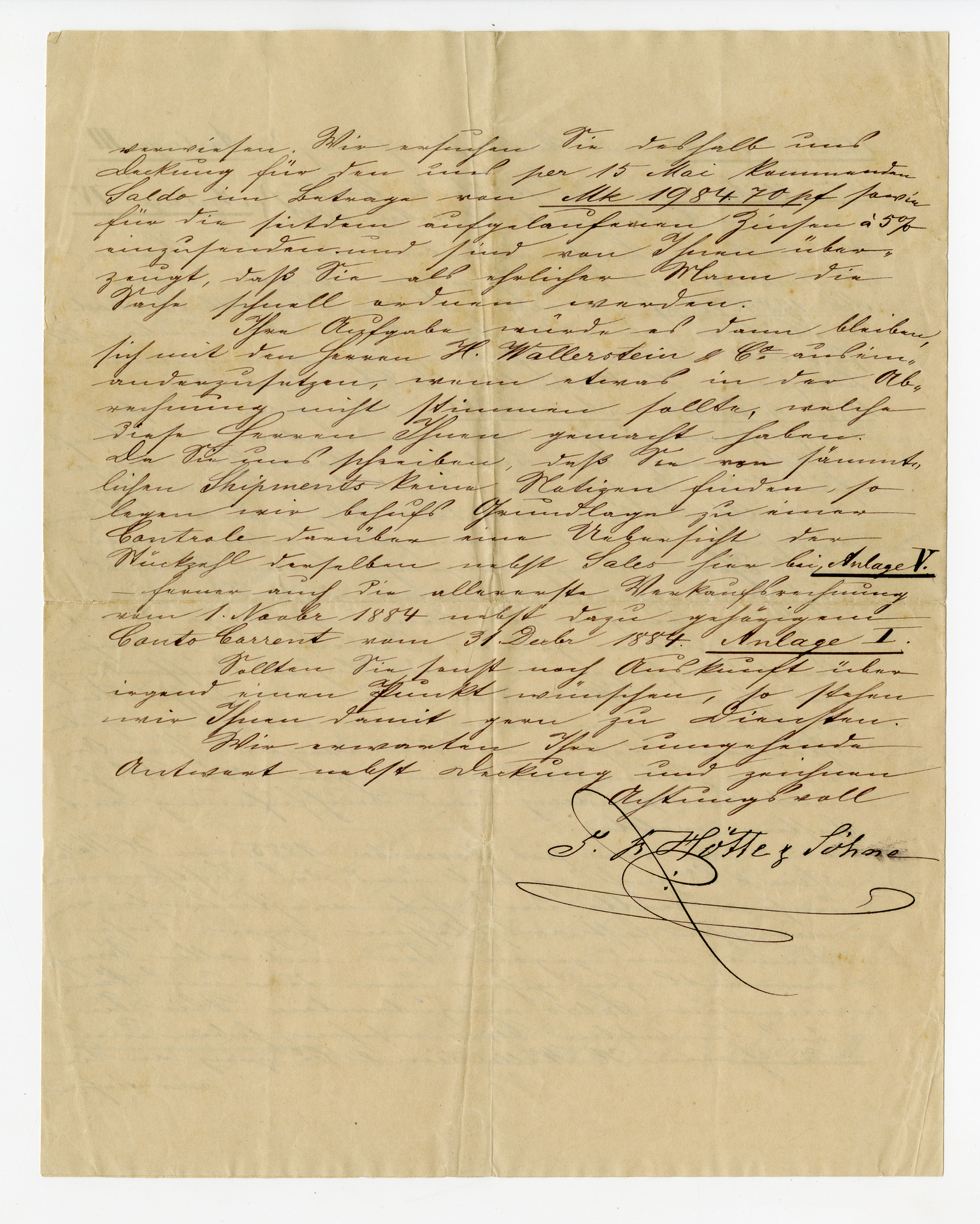 J.B. HOTTE & SOHNE Messer C. Haase 624 Broad St Richmond, Va. Leipzig, 7th July, 1887 We have received your letter of June 10th inst., from which we perceived to our astonishment, that Messrs H Wallerstein & Co have left you completely without knowledge of our correspondence of the past two years. We feel it to be our duty to inform you now of all that has taken place since our last letter to you, which was dated 18th April 1885. This is confidential information, and is communicated to you with the implicit trust that you will not allow Messrs H Wallerstein to learn what we have written you. Your letter of 1st May 1885 advised us of the impending arrival of Mr. Hermann Wallerstein senior, who had arrived here on 29th June from Richmond, accompanied by a Mr. Binswanger, and had been here for 3 days. He waited in vain expectation of letters from you, in order to learn what he should take care of for you, and he restricted himself to examining various furs in rabbit, Astrakhan, etc. He gave us 1400 raw mink skins on consignment, which were in storage at the J. C. Seebe shipping agency. He would have preferred to sell us the rest of his raw furs for cash-to close out as he put it-however, we gave preference to keeping them on consignment. With respect to his relationship with yourself he told us that his contract with you would expire in the coming year, and that he would probably not renew it; that he would inform us later concerning this, which however he did not do. That for the present we should address all correspondence to him only, that he and his sons handled all paperwork, that in any case the raw furs trade actually belonged to his commodities business. He proposed to us in the name of the firm of H Wallerstein & Co. to set up from that date a joint account for dealing in raw furs; we reserved for ourselves time to think it over. These were the only occurrences during his sojourn here, which involved us. We did not observe that Mr. W. during that time had entered into any livelier trade with other local firms, except that he visited Mr. Kunne a number of times. Concerning his proposal to deal in raw furs through a joint account, we corresponded with his firm a number of times during the autumn of 1885; however, these negotiations led to no decision and were broken off at the end of that year. Beginning with the year 1886 we wrote the following letters to Messrs H Wallerstein & Co, and indeed, from that time onward, all correspondence concerned your affairs: 1886, 29 January. with sales invoice and current account to end of Dec. 1885 } Attachment II 1886, 2 Nov. with sales invoice } Attachment III 1887, 30 April with.final sales invoice and current account of 15 May 1887 } Attachment IV. In the last-mentioned letter, we sent to Messrs H Wallerstein & Co our sight draft in the amount of 1984 Marks 70 pf payable to Knauth, Nachod & Kuhne. This draft, however, was returned unpaid. Shortly thereafter we received a letter from H Wallerstein & Co, dated: 1887, 9 June } Attachment VI 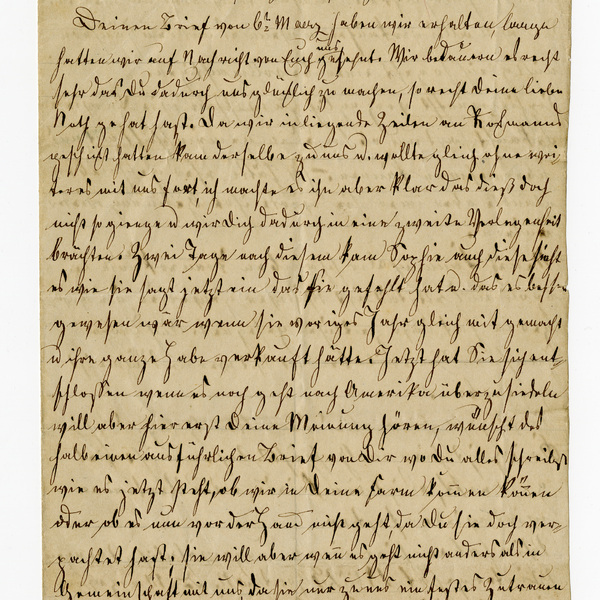 Images of materials and some transcriptions and translations are provided by the Library of Virginia and used with permission.
Item: Hötte & Sons to Charles Haase, July 7, 1887