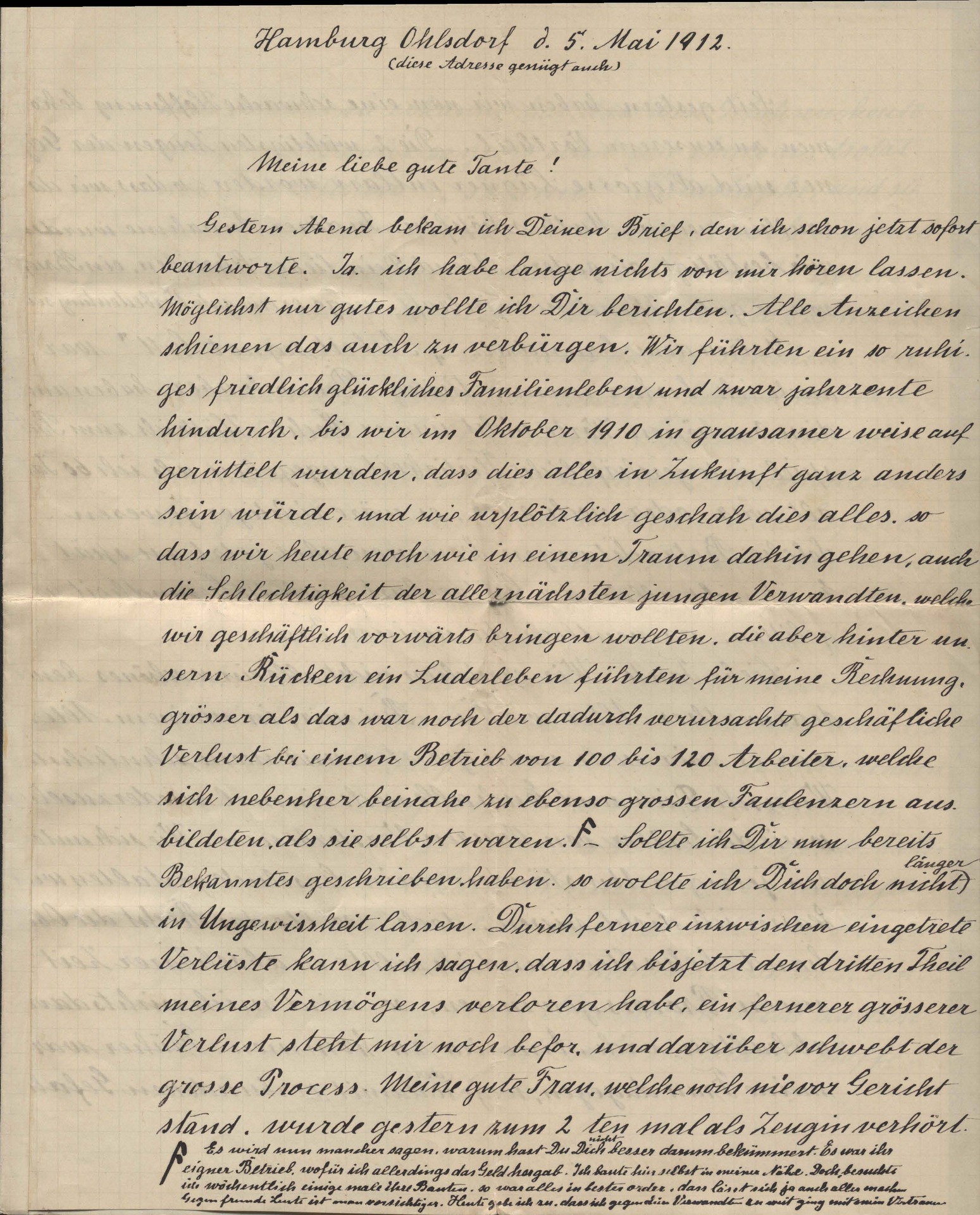 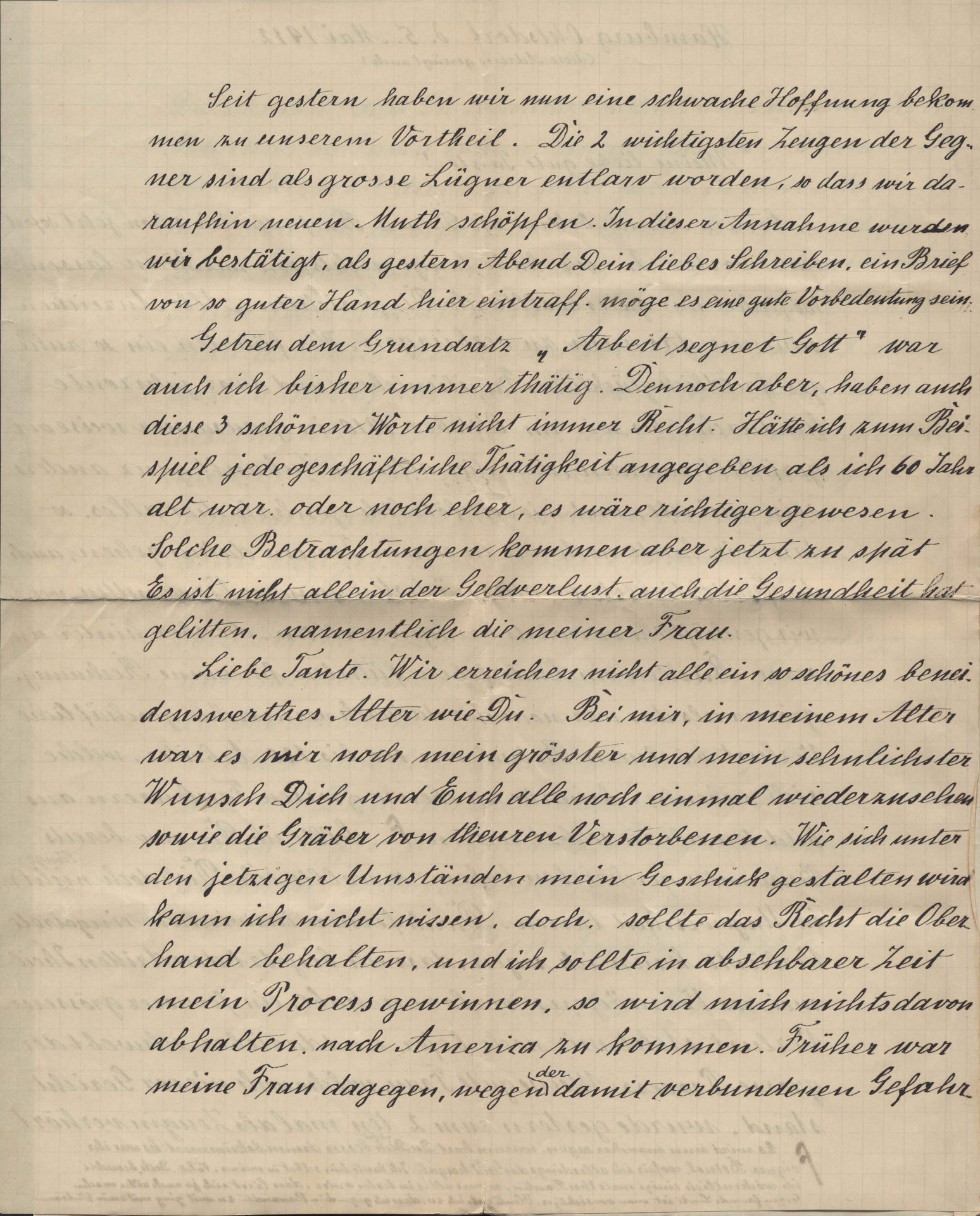 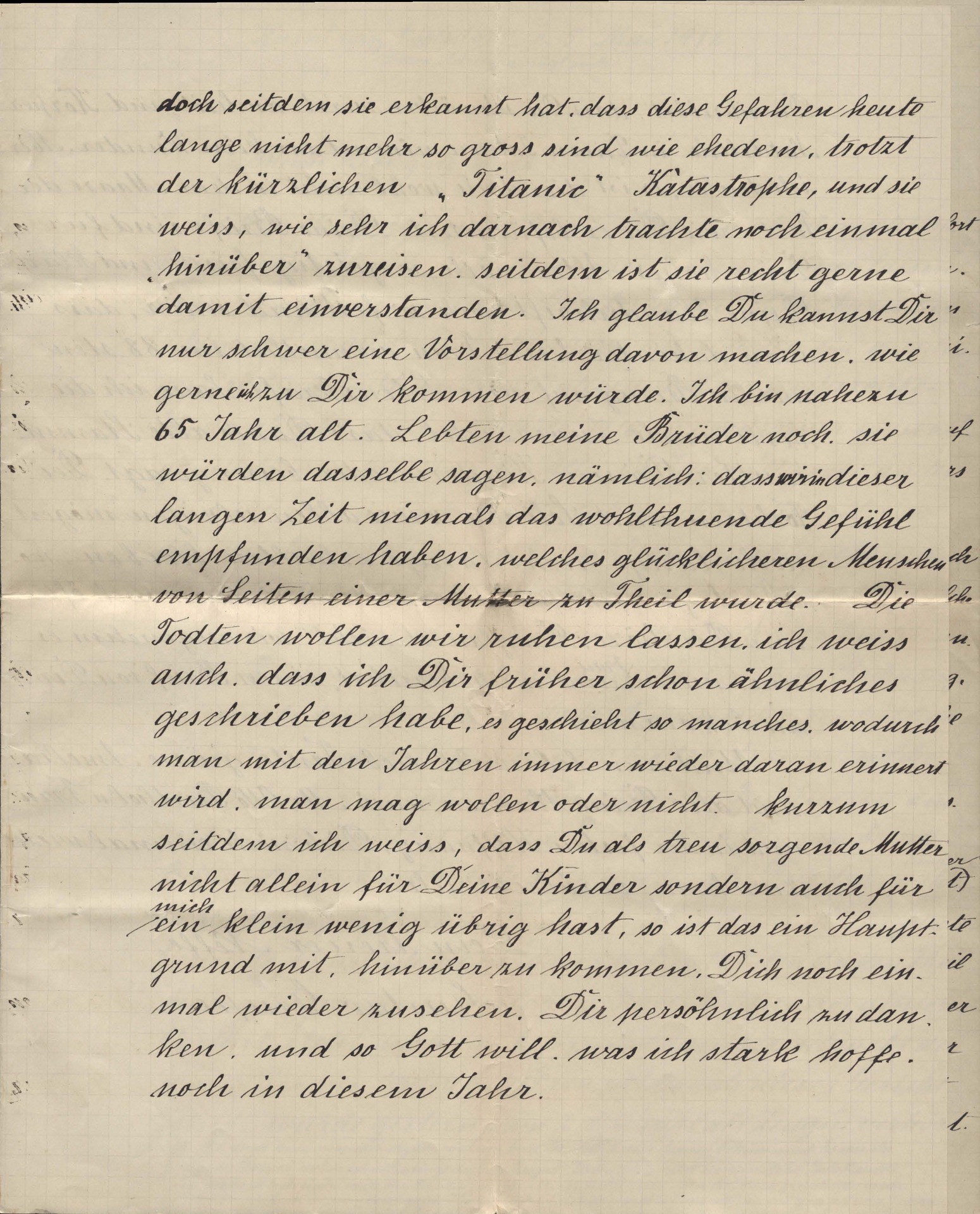 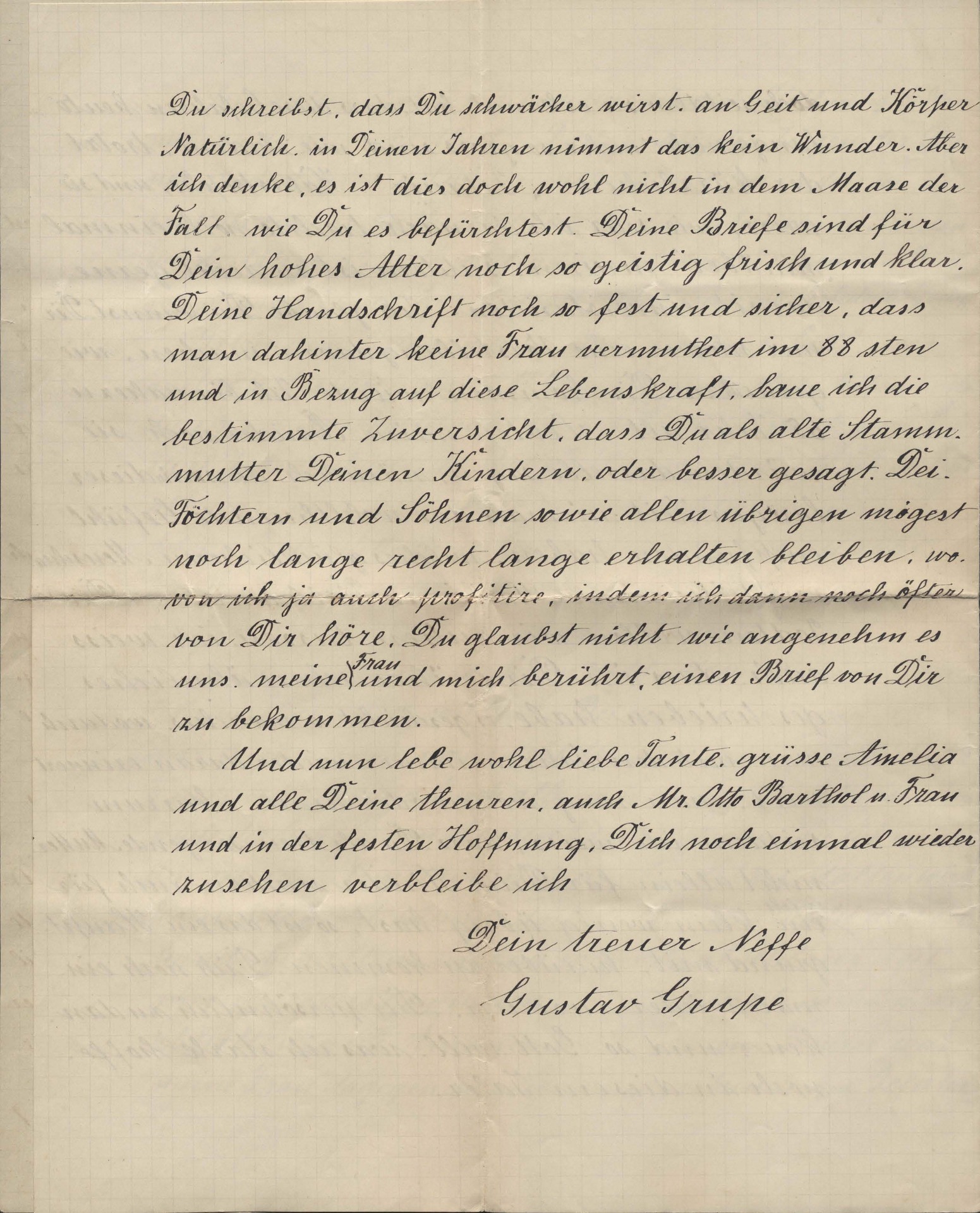 Page 1 Hamburg Ohlsdorf May 5, 1912. (this address is also sufficient) My dear good aunt! Yesterday evening I received your letter, which I am answering immediately. Yes. You haven't heard from me for a long time. I wanted to tell you things as good as possible. All the signs seemed to vouch for it. We led such a quiet, peaceful, happy family life for decades until we were shaken up in October 1910 in a cruel way that all of this would be very different in the future, and how suddenly it all happened. so that we still go there today as if in a dream, also the wickedness of the very closest young relatives, whom we wanted to advance in business, but who led a bitch's life behind our backs for my account. Even greater than that was the business loss it caused in a company of 100 to 120 workers, who at the same time turned out to be almost as big idlers as they were themselves. * If I have already written you something you already know, I did not want to leave you in the dark any longer. Through further losses that have occurred in the meantime, I can say that I have so far lost the third part of my fortune, a further, greater loss is still ahead of me, and the great lawsuit is hanging over it. My good wife, who has never been on trial, was interrogated as a witness for the second time yesterday. *Some will now say, why didn't you take better care of it. It was their own business, for which I gave away the money. I built here near myself, I visited their buildings a few times a week. so everything was in the best order, but everything can be done. One is more careful with strangers. Today I admit that I went too far with my trust in relatives. Page 2 Since yesterday we got a faint hope to our advantage. The two most important witnesses of the opponents have been exposed as big liars, so that we can draw new courage. We were confirmed in this assumption when your dear letter, a letter from such a good hand, arrived here yesterday evening. may it be a good premonition. True to the principle “God blesses work”, I have always been active up to now. Nevertheless, even these 3 beautiful words are not always right. For example, did I list every business activity when I was 60 years old. or rather, it would have been more correct. But such considerations come too late now. It's not just the loss of money. my health has also suffered, especially that of my wife. Dear Aunt. We don't all live to such a beautiful enviable age as you do. With me, at my age, it was still my greatest and my dearest wish to see you and all of you again, as well as the graves of dearly deceased. I cannot know how my fate will develop under the current circumstances, but I can. if the law should prevail, and should I win my trial in the foreseeable future, nothing will prevent me from doing it. to come to America. My wife used to be against it because of the danger involved. Page 3 but since she realized that these dangers are now a long way from being as great as they were before, despite the recent "Titanic" disaster, and she knows how much I try to travel "over" again. since then she's been happy to agree to it. I think you have a hard time getting an idea of how much I would like to come to you. I am almost 65 years old. If my brothers were still alive they would say the same thing, namely: that in this long time we have never felt the beneficial feeling which happier people received from a mother. We want to let the dead rest. I also know that I have written similar things to you earlier, so many things happen that remind you of it over and over again over the years. Whether one likes it or not. in short, since I know that you, as a loyal mother, not only have a little left for your children but also for me, that's one of the main reasons to come over. To see you again to thank you personally - so help me god - what I really hope later this year. Page 4 You write that you are getting weaker. in mind and body. Naturally. in your years it's no wonder. But I think this is probably not the case to the extent that you fear it. Your letters are still so spiritually fresh and clear for your old age. Your handwriting is still so firm and sure that you don't suspect a woman behind it in the 88th and with regard to this life force, I build the certain confidence that you, as the old ancestral mother, will long to like your children, or better said your daughters and sons and everyone else stay for quite a long time, from which I also benefit by hearing from you more often. You don't believe how pleasant it affects my wife and me to receive a letter from you. And now goodbye dear aunt, greet Amelia and all your dear ones, including Mr. Otto Barthol and wife, and in the firm hope of seeing you again I remain your loyal nephew Gustav Grupe 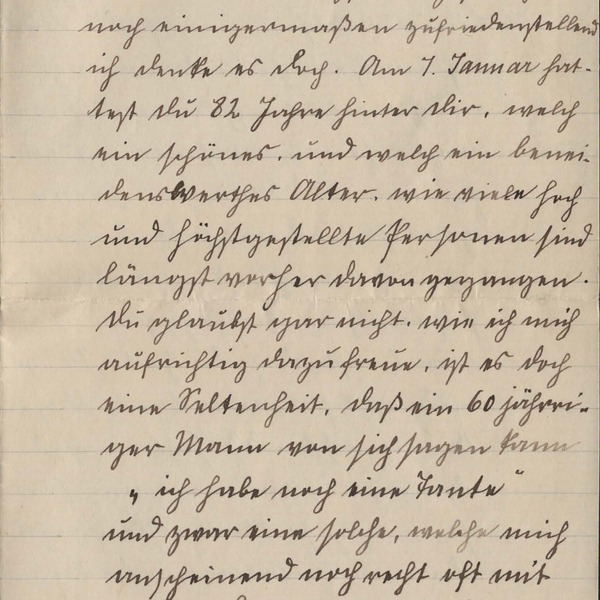