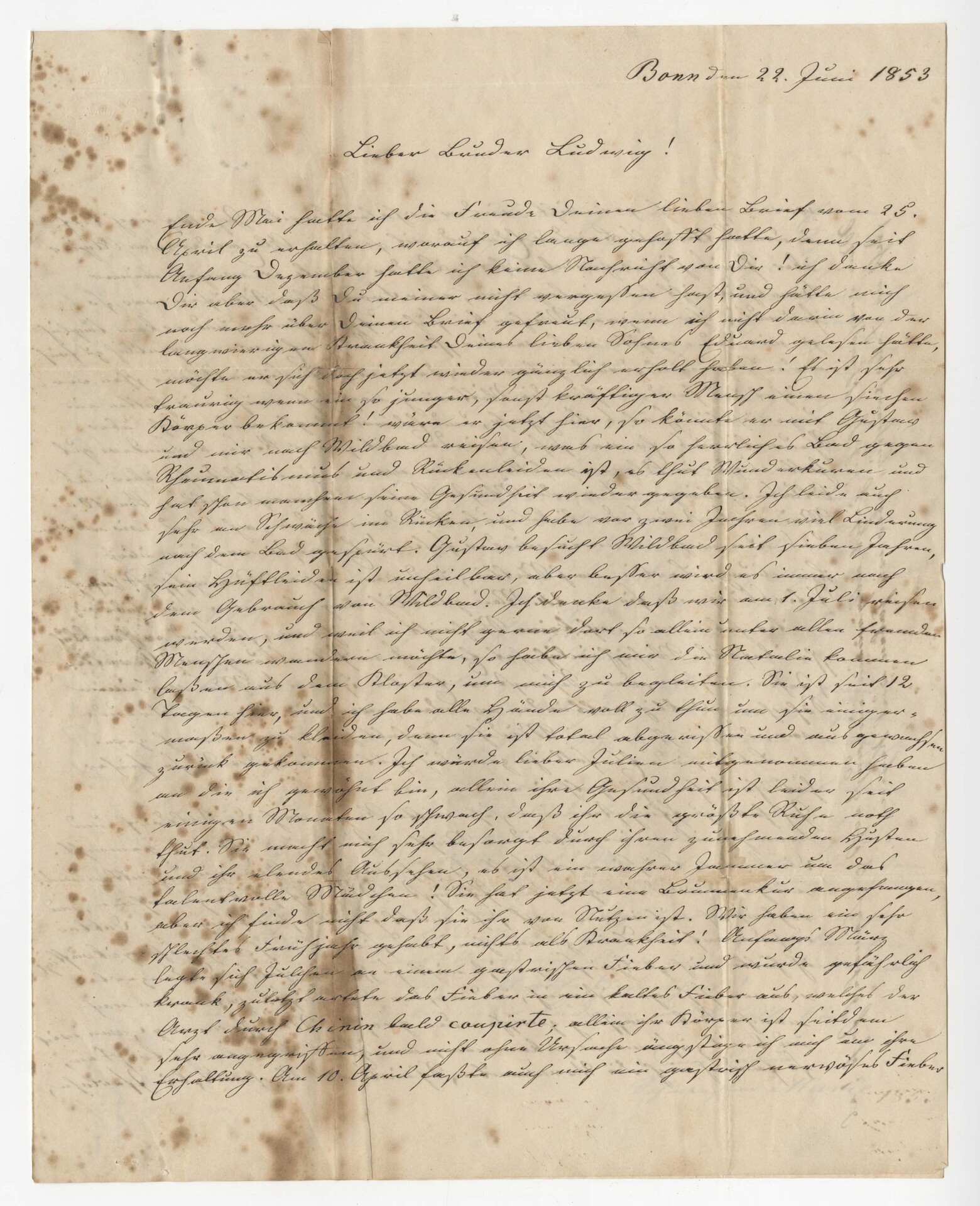 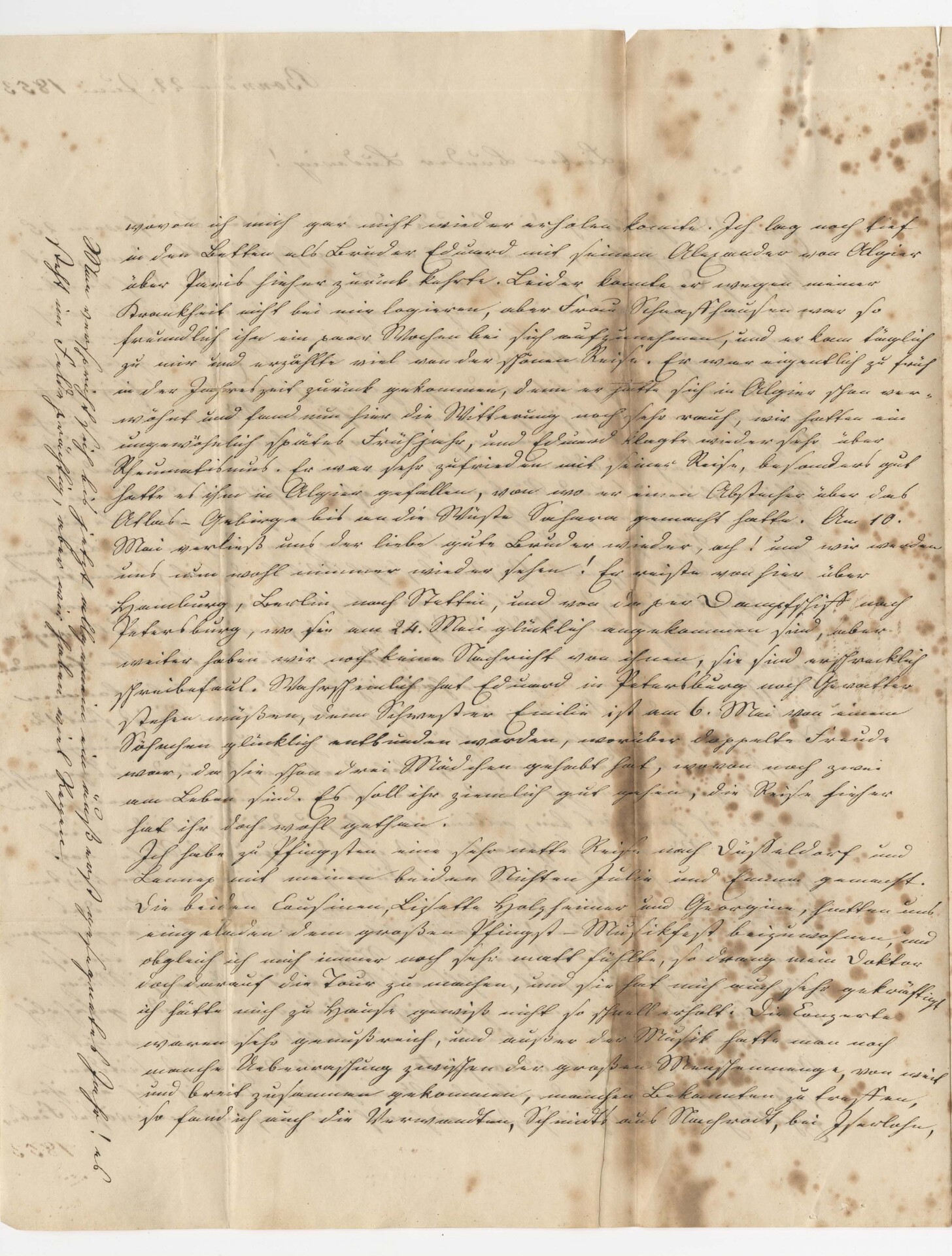 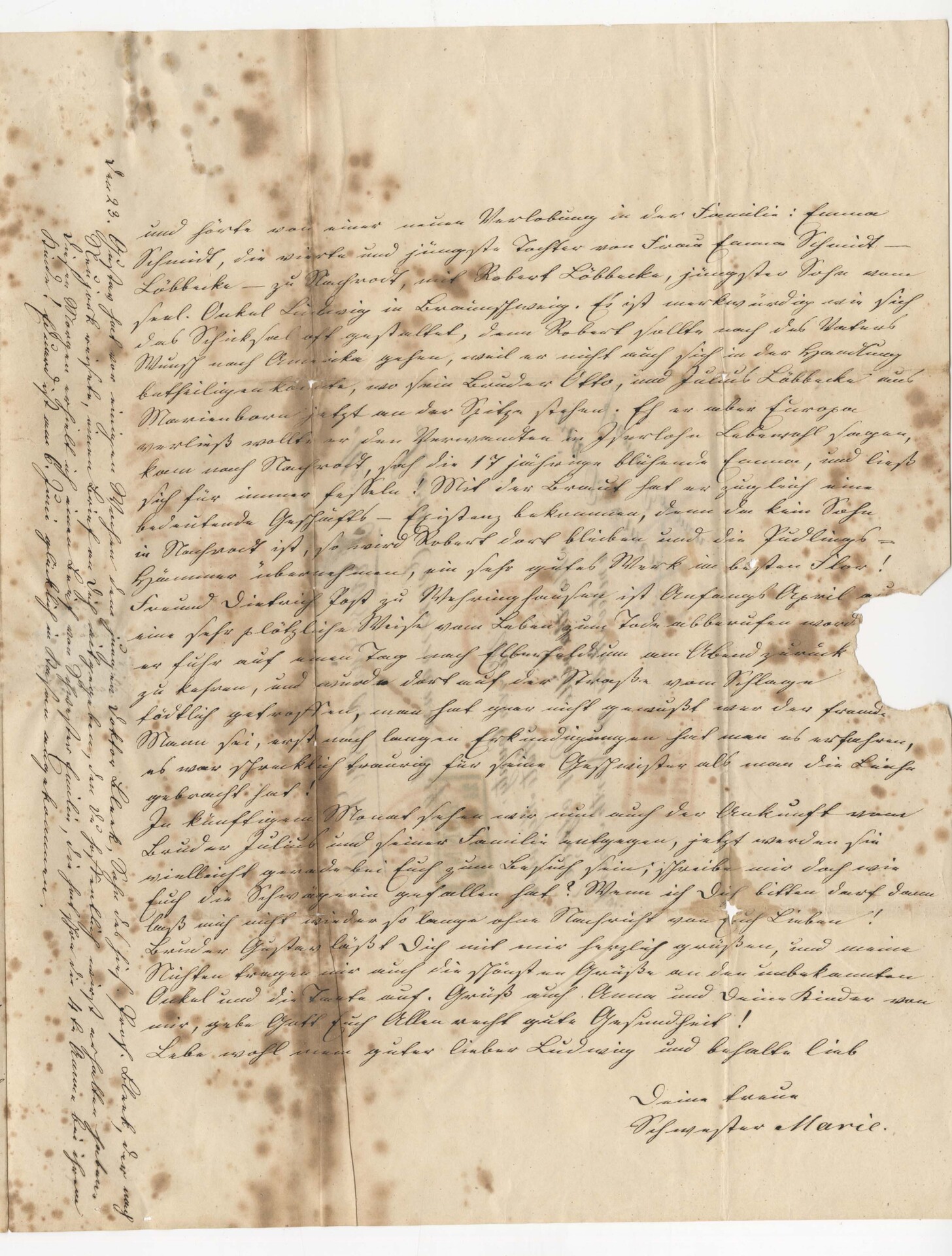 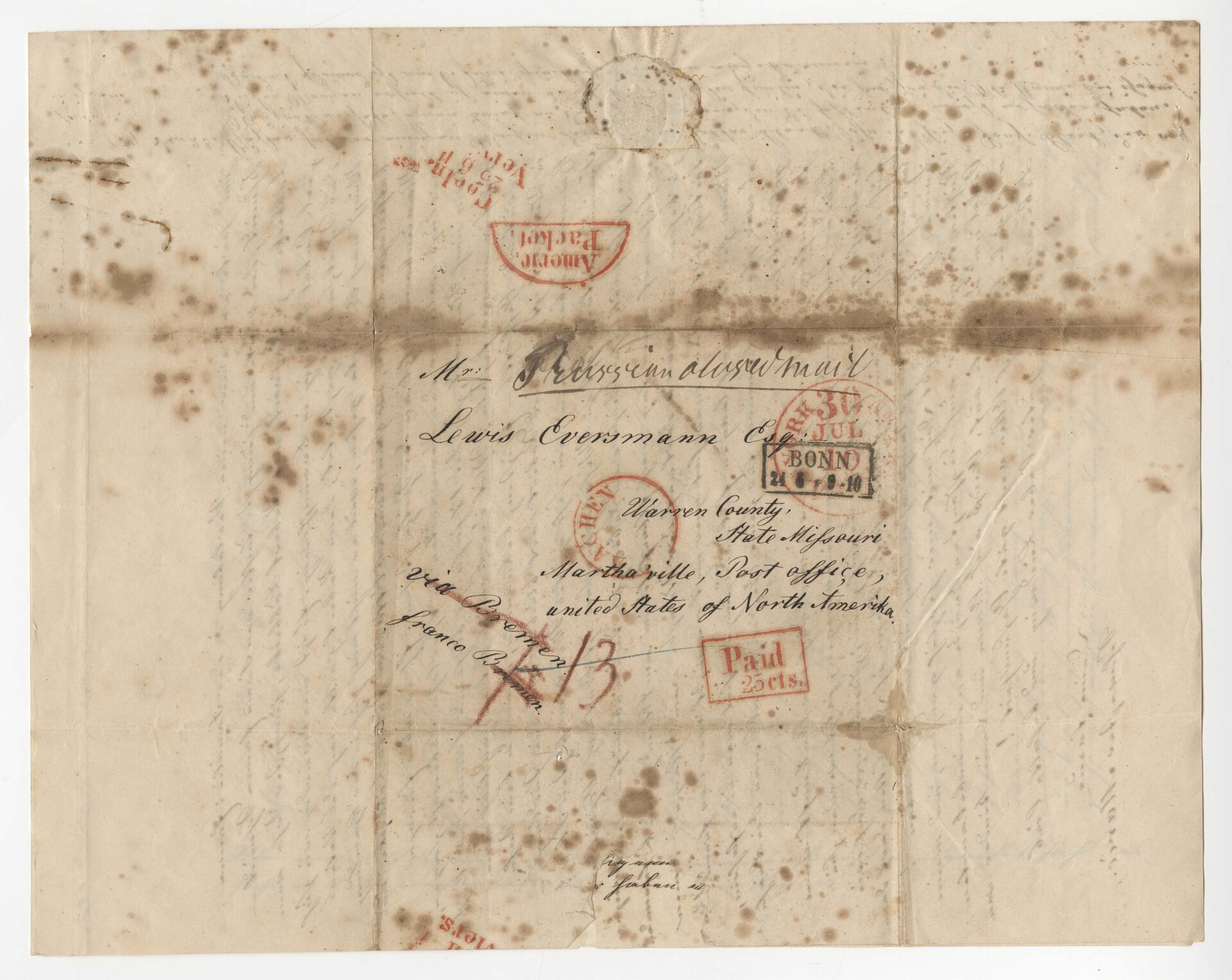 The end of May brought me the joy of your dear letter dated April 25th, which I had anticipated for a long time as I had been without news from you since the beginning of December! I am thankful, however, that you have not forgotten me, and your letter would have made me even happier, had it not contained the news of your dear son Eduard's prolonged disease, I wish that he might be completely cured of it by now! It is very sad when such a young and otherwise strong person develops a seriously ill body! If he was here now, he could travel to Wildbad with Gustav and me; that is such a magnificent spa for rheumatism and back pain, it works wonders and has returned good health to many a person. I, too, suffer tremendously from a weak back and two years ago I felt so much better after the spa. Gustav has visited Wildbad for seven years now, his ailing hip is incurable, but it always improves after using Wildbad. I think that we will travel on July 1, and because I do not feel inclined to hike there all by myself among strangers, I had Natalie join me from the convent to be my companion. She has been here now for 12 days and I am more than busy to get her reasonably dressed, because she returned completely in rags and washed out clothing. I would have much preferred to take Julie with me to whom I am accustomed, however, her health has been so bad for several months now that she must rest as much as possible. Her worsening cough and her miserable looks make me worry a lot, it is such a shame about the talented girl! Now she has started taking the waters, but I cannot see that doing her any good. We have had a very bad spring, nothing but sickness! At the beginning of March Julchen took to her bed with gastric fever and became dangerously ill, finally the fever turned into a cold fever, which the doctor cured pretty soon with the help if quinine; however, her body has become very weak since then, and it is not without reason that I worry about her staying around. I was also gripped by a gastric nervous fever on April 10,

and I just could not get back on my feet again. I was still deep in my bed when brother Eduard returned home from Algier via Paris, together with his Alexander. It was too bad that he could not stay with me because of my sickness, but Frau [Schmaffhausen?] was kind enough to put him up at her house for a couple of weeks. This way he visited me on a daily basis and told me a lot about his beautiful trip. He had really returned too early in the season, because he had already pampered himself in Algier and therefore found the climate here to still be rather harsh. We had an unusually late spring, and Eduard complained a lot again about his rheumatism. He was very satisfied with his journey, and he had liked it especially in Algier, from where he undertook a side trip across the Atlas Mountains all the way to the Sahara Desert. The dear good brother left us again on May 10, too bad! And maybe we will never see him again. From here he traveled via Hamburg, Berlin to Stettin, and from there by steamer to Petersburg, where they arrived safe and sound on May 24, but other than that we have no news from them, they are terribly lazy about writing. Most likely Eduard had to act as godfather in Petersburg, as sister Emilie had successfully given birth to a little son; they were doubly joyous because she had already had three girls, two of whom are still alive. She is said to be in pretty good shape, the trip to here has obviously done her good. At Pentecost I undertook a very nice trip to Düßeldorf and Lennep, with my two nieces Julie and Emma. Both cousins, Lizette Holzheimer and Georgina, had invited us to attend the big Pentecost music festival. And although I was still feeling very faint, my doctor urged me to do the tour; and it did indeed strengthen me a lot, at home I would not have recuperated so fast. The concerts were very enjoyable, and apart from the music there were also quite a few surprise meetings with friends, as the great crowd of people had gathered from all over the place. This way I also ran across the relatives, Schmidts from Nachrodt, near Iserlohn,

[left margin:] In general people are expecting a very blessed year, so far! Everything is growing gorgeously in the fields, but we do have a lot of rain.

and I heard about a new engagement in our family: Emma Schmidt, the fourth and youngest daughter of Frau Emma Schmidt- Löbbecke, from Nachrodt, with Robert Löbbecke, the youngest son of the late Uncle Ludwig in Braunschweig. It is strange how destiny works sometimes, because according to his father's wish Robert was supposed to emigrate to America; the reason being that he could not be a partner of their enterprise in addition to his brother Otto and Julius Löbbecke from Marienborn, who are now running the company. Before he left Europe, however, he wanted to say goodbye to his relatives in Iserlohn, came to Nachrodt, saw the 17-year-old blossoming Emma and let himself be captivated for life! Together with the bride he obtained a substantial business existence, because as there is no son in Nachrodt, Robert is going to stay and take over the Pudlings Hammers, a very good and flourishing company! At the beginning of April our friend Dietrich Post from Wehringhausen was called from life to death in a very abrupt way. He went to Elberfeld just for one day, with the intent to return in the evening; and there he was hit by a stroke , right in the street, at first people did not even know who the stranger was. It was only after lengthy investigations that they found out, it was terribly sad for his siblings when the body was brought home! Now this next month we are also looking forward to the arrival of brother Julius and his family; maybe they are just staying with you at this moment; please tell me how you liked the new sister-in-law? If I may ask you kindly, do not leave us again for so long without any news from you dear ones! Brother Gustav sends his kind regards together with me, and my nieces also ask me to say hello from them to their unknown uncle and aunt. Please give my greetings also to Anna and your children, may God bless you all with good health! Farewell, my good dear Ludwig and keep in your heart your faithful sister Marie

[left margin:] The 23rd. Some weeks ago, Gustav gave a letter to you to young Doctor Bleek, son of our Professor Bleek here, as he was traveling to New York, and I hope that you got it. This morning I received one of sister Emilie's letters, she already has the fourth nanny for her child! Eduard has arrived safe and sound in [illegible] on June 6th. 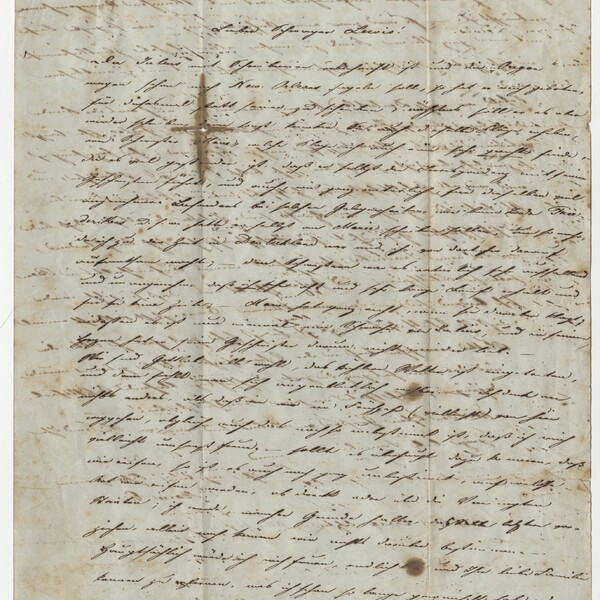