Description: Letter from Dorothea Handel (Schuhmacher) and Peter Schuhmacher to her parents, June 1, 1854. 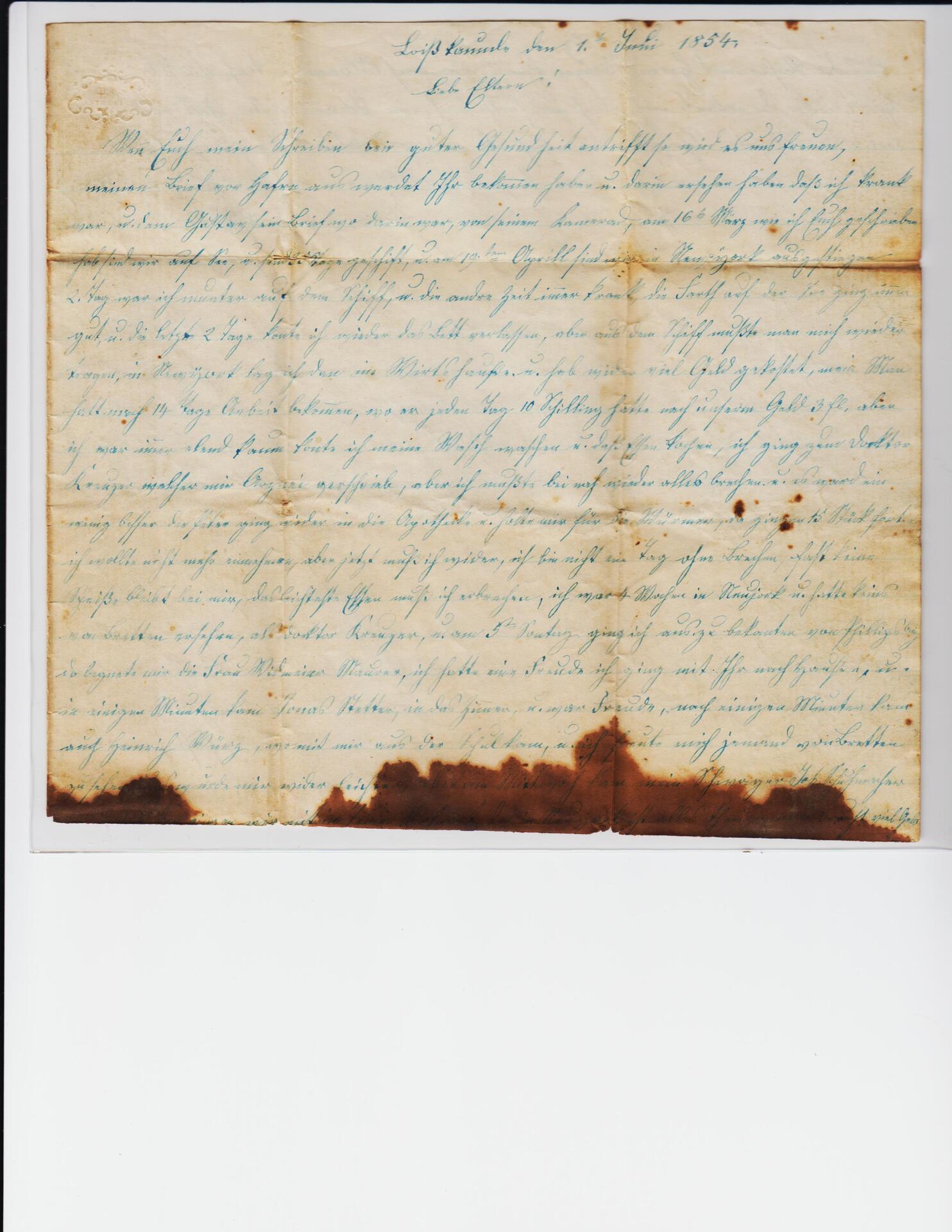 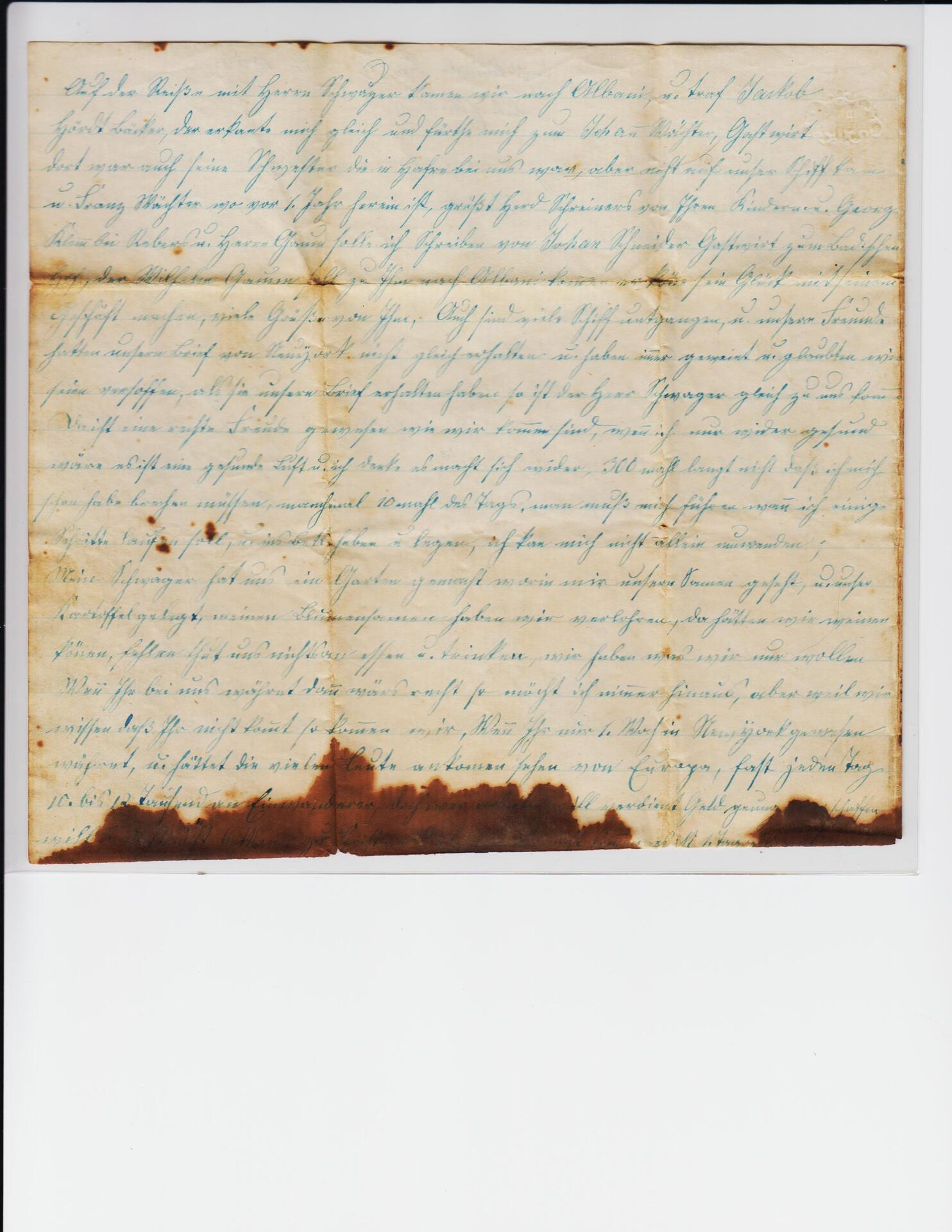 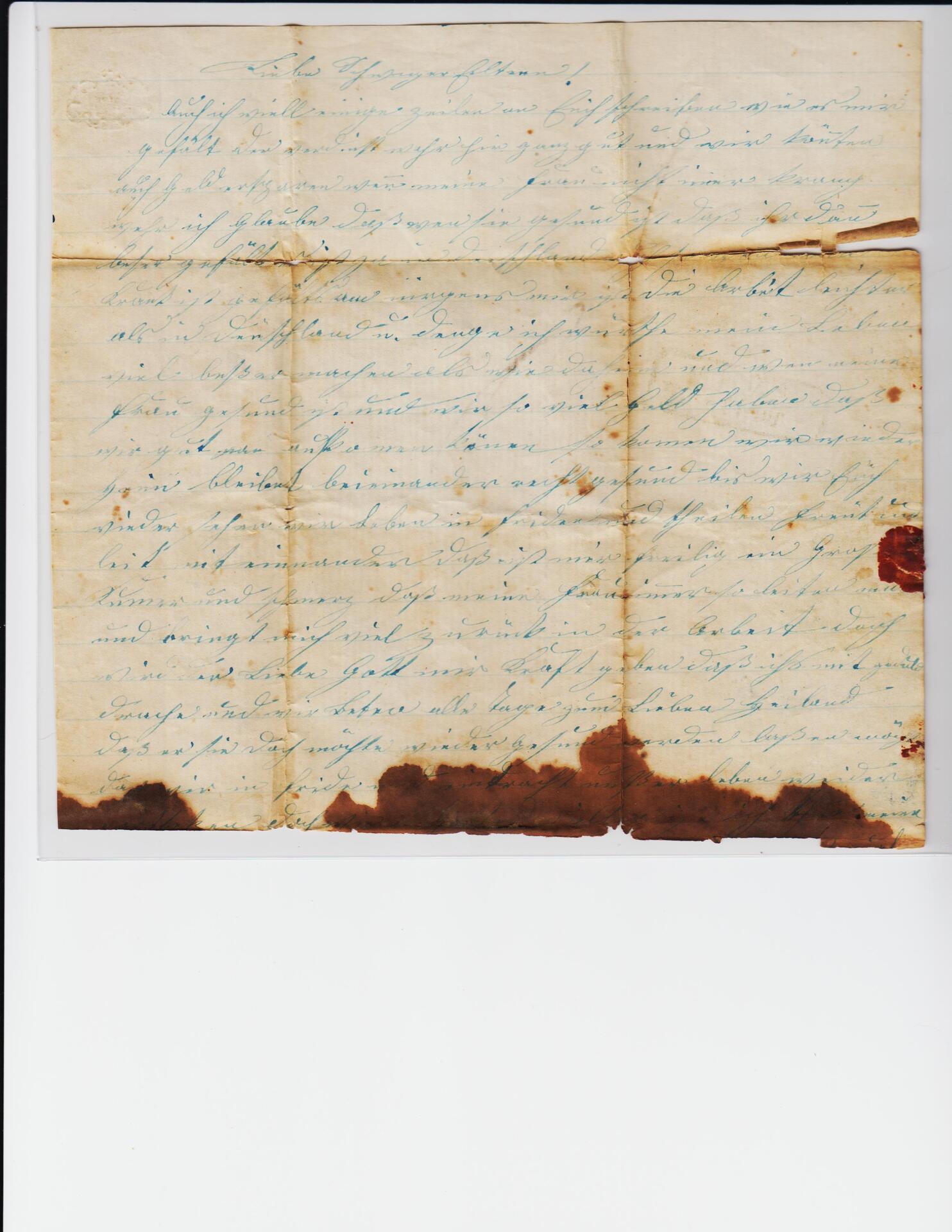 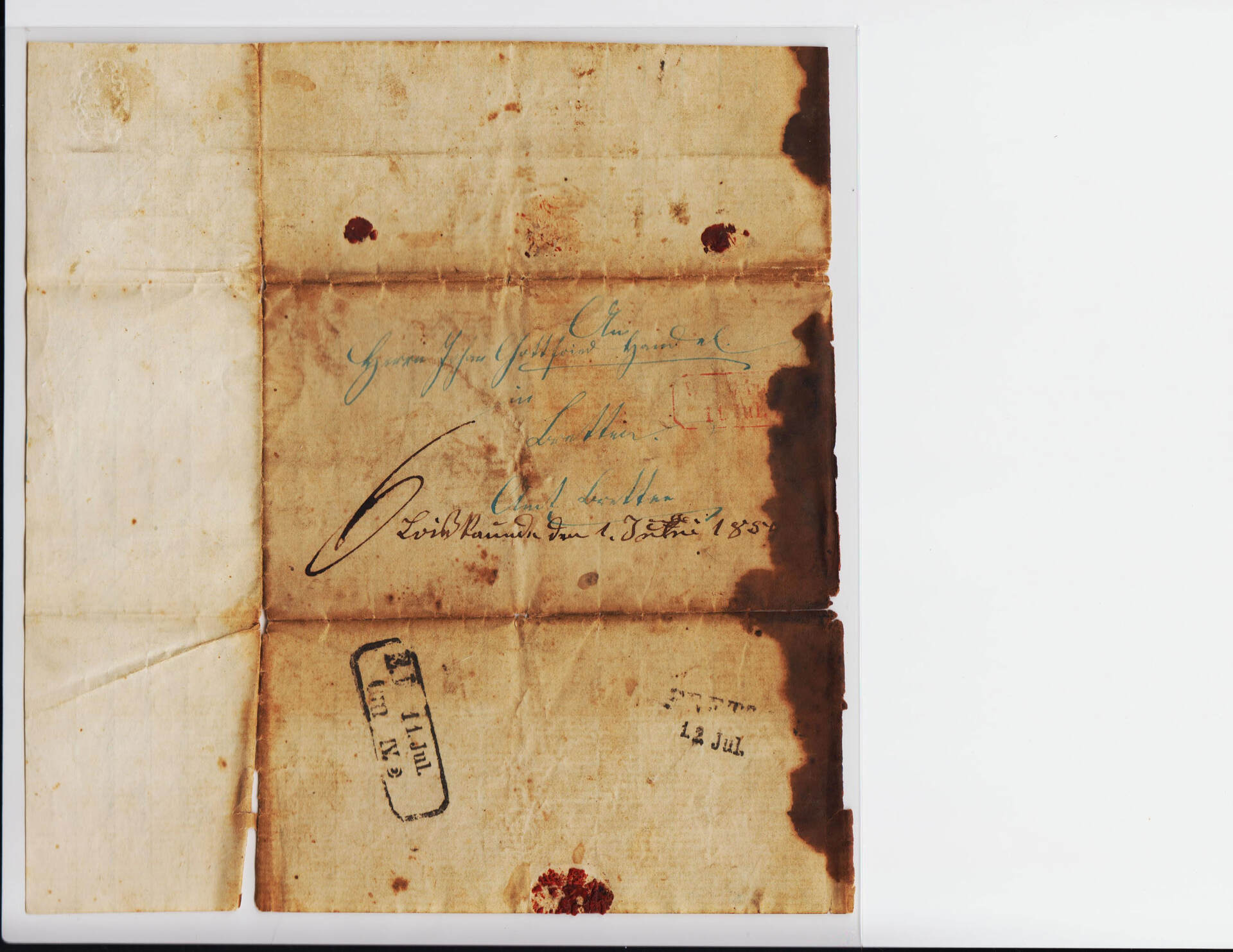 We will be delighted if this letter finds you in good health. You will have received my letter from Le Havre, and have read that I was sick, and along with it the letter from Gustav and from his friend, that was included. As I wrote to you, we departed on 16 March. We traveled for 35 days, until we arrived in New York on 19 April. I was well for only two days on the ship, the other days I was ill. The journey over the ocean went smoothly. I could get out of bed for the last two days, but then they had to carry me off the ship.

In New York I stayed in bed at the inn and caused expenses, while my husband was able to find work after two weeks. He earned 10 Schilling a day, which is about 3 Gulden in our currency, but I was so unwell I could barely do the washing and cook the meals. I went to see Dr. Kreuzer who prescribed medication, but I kept vomiting nearly everything. I got a little better and Peter went to the pharmacy for a worm treatment, and 15 worms were expelled. I didn’t want to take any more, but now I will have to, there is no day where I don’t vomit. I can barely keep down even the lightest food, I throw up almost everything. I was in New York for four weeks and did not see anyone from Bretten other than Dr. Kreuzer.

On the fifth Sunday I went to visit acquaintances of Phillip [Buch?], and there I met Mrs. Widmeier Maurer. What a joy that was! I went home with her, and after a few minutes Jonas Stetter came into the room, so much joy! A few minutes later Heinrich Würz, with whom I went to school, stopped by. I was so delighted to see friends from Bretten, and was feeling a bit better.  But then on Wednesday my brother-in-law Johann Schuhmacher came, and we went along with him to his home town. Everything in New York is expensive, and one needs a lot of money

On the journey with Brother-in-Law we came to Albany and met Jakob Hördt, the baker. He recognized me right away and took me to Johann Wächter, the innkeeper. There we also saw his sister who had been with us in Le Havre, but didn’t board the same ship as we did, and also Franz Wächter, who arrived a year ago. Please relay greetings to carpenter Hördt [Herd] from his children, and also to Georg Klein at Rebers. I was asked to write to Mr. Gaum with a message from Johann Schneider, innkeeper at “Badischer Hof,” that Wilhelm Gaum should come to Albany, where he can succeed in business. Many greetings from him.

Many ships have sunk, and when our friends in Albany didn’t get our letter from New York right away, they wept and feared we might have drowned. When our letter did arrive, our brother-in-law immediately came to get us, and there was great joy when we arrived.

If only I could be healthy again, the air here is good and I believe I will improve. 300 incidents of vomiting aren’t enough yet, sometimes it’s as often as ten times a day. I need assistance to walk a few steps, and have to be helped in and out of bed, I can’t even turn myself over.

My brother-in-law prepared a garden for us in which we have planted our seeds and our potatoes. We lost my flower seeds – we could have cried. But we lack nothing in food or drink, we have everything we could want.

If you could be with us, I would be happy and would never want to leave again. But we know you won’t come, so we will come to you. If only you could spend a week in New York and see the immigrants arriving from Europe. Often there are 10,000 to 12,000 a day. Still, everyone who wants to work, can make a living. Those who are willing to do labor will not be beggars. I haven’t been to see Christian Scholz, he lives a day’s travel away. [remainder of page is missing]

I will add some lines to you to let you know how I like it here. The earnings here are quite good.  If my wife wasn’t sick, I think we would be able to put away some savings. I believe that once she feels better, she will like it better here. It’s no different in Germany: when one is sick, one doesn’t really like it anywhere.

The work here is easier for me than in Germany, and I expect I will do better here than back home. Once my wife is well and we have enough income that we can make a good living, we will come back home. Please stay well and healthy until we see you again.

We live peacefully and share joys and sadness with each other. It does worry and pain me that my wife is suffering so much, and that this holds me back in my work. The Good Lord will give me the strength and patience I need. We pray to our Savior every day that He may heal her so we can carry on with our lives in peace and harmony. But whatever God’s will is, I will do my ... [remainder of page is missing]

[illegible: from here on the page is torn and burnt and thus illegible]

[illegible: from here on the page is torn and burnt and thus illegible]

Letter from Dorothea Handel (Schuhmacher) and Peter Schuhmacher to her parents, June 1, 1854. 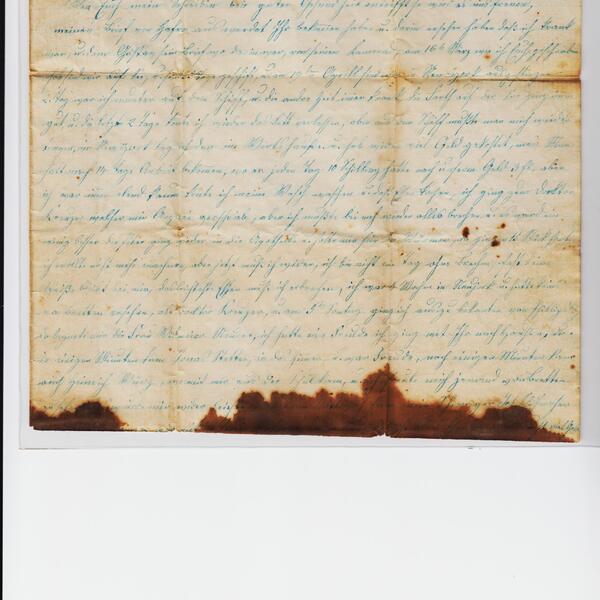