Description: Letter from Frieda Amerlan to Louis Benecke, the widower of her sister Josephine Amerlan, September 1, 1919. This was evidently her first letter to her brother-in-law in several years and describes the consequences of World War I for the Amerlan family in Germany. 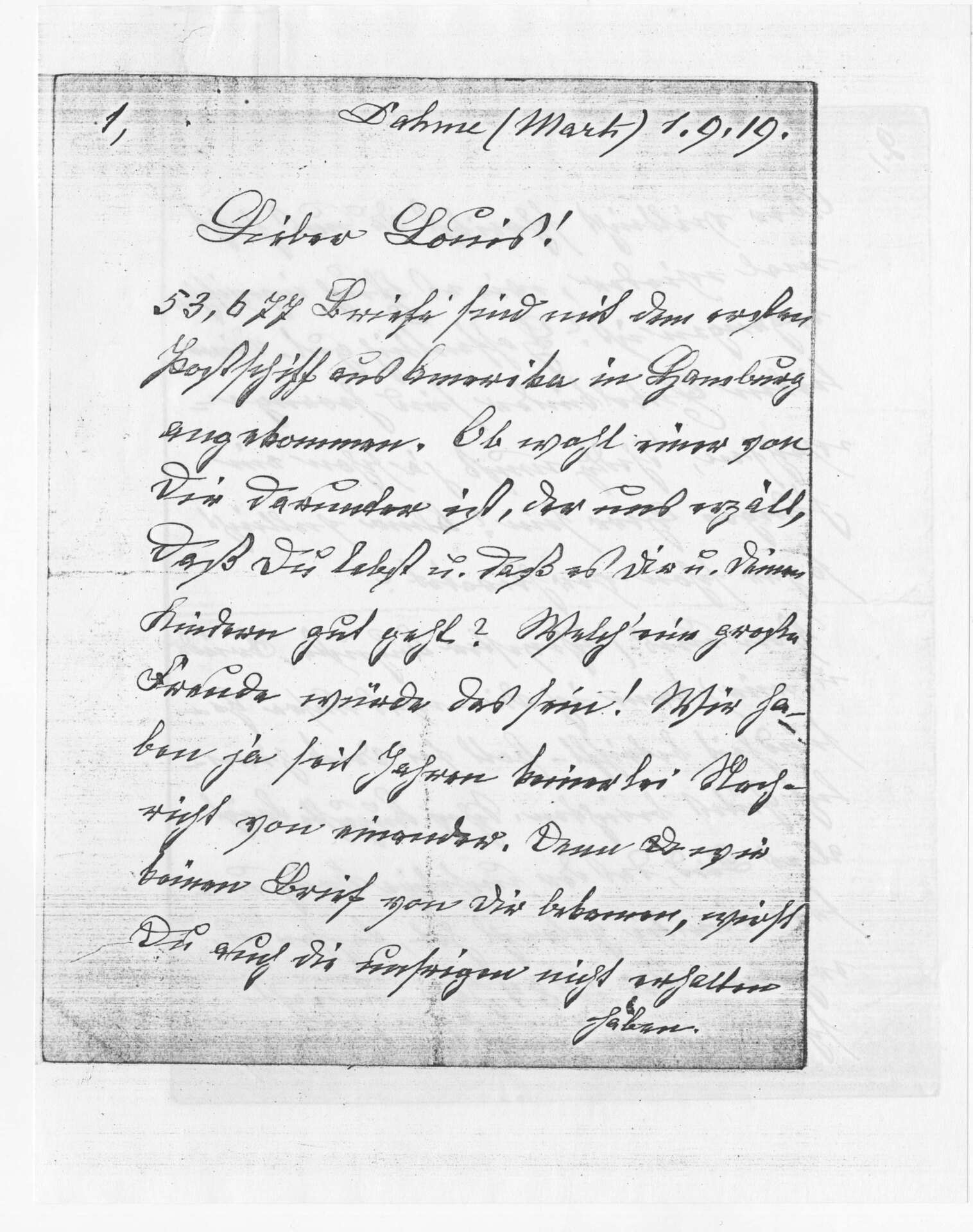 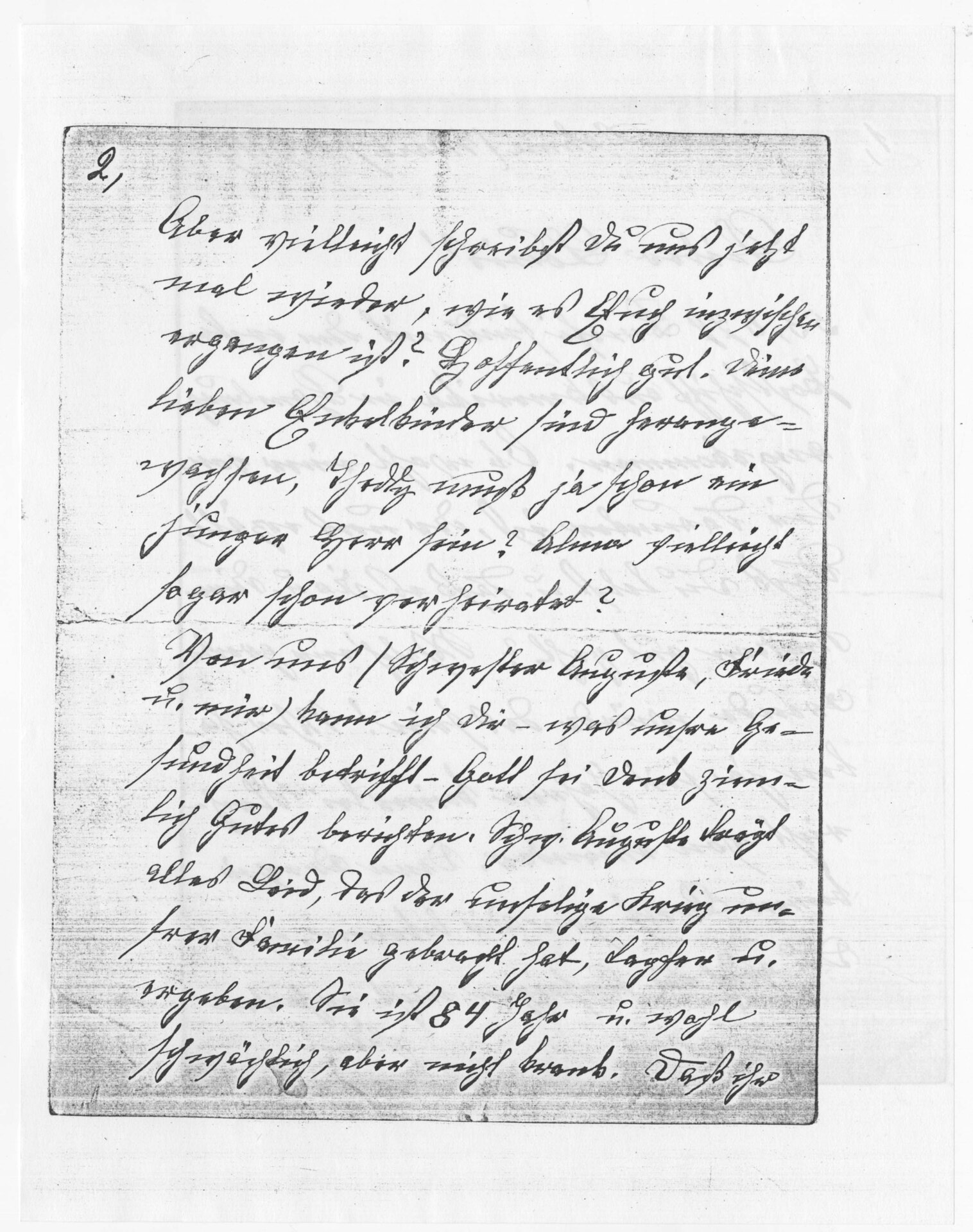 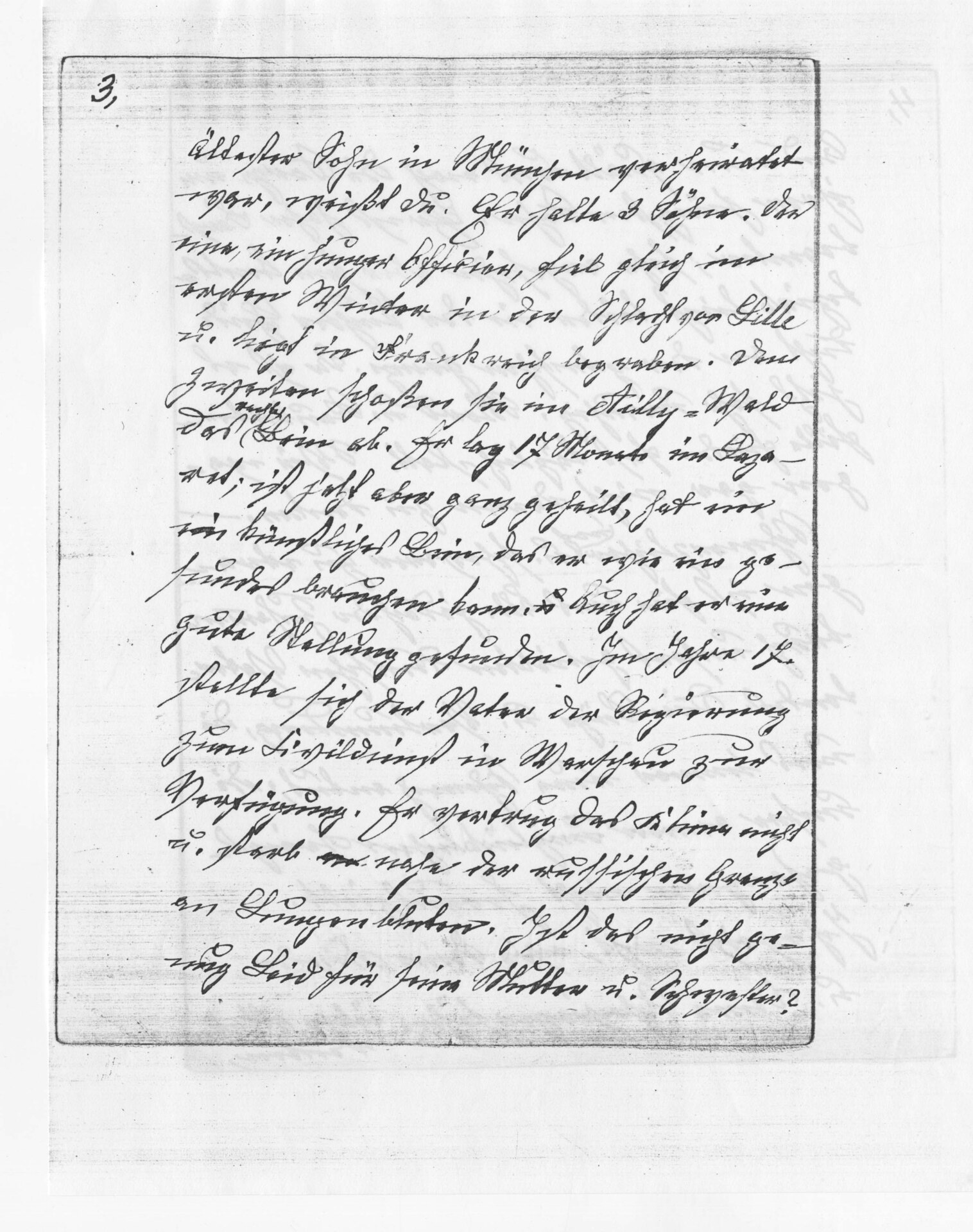 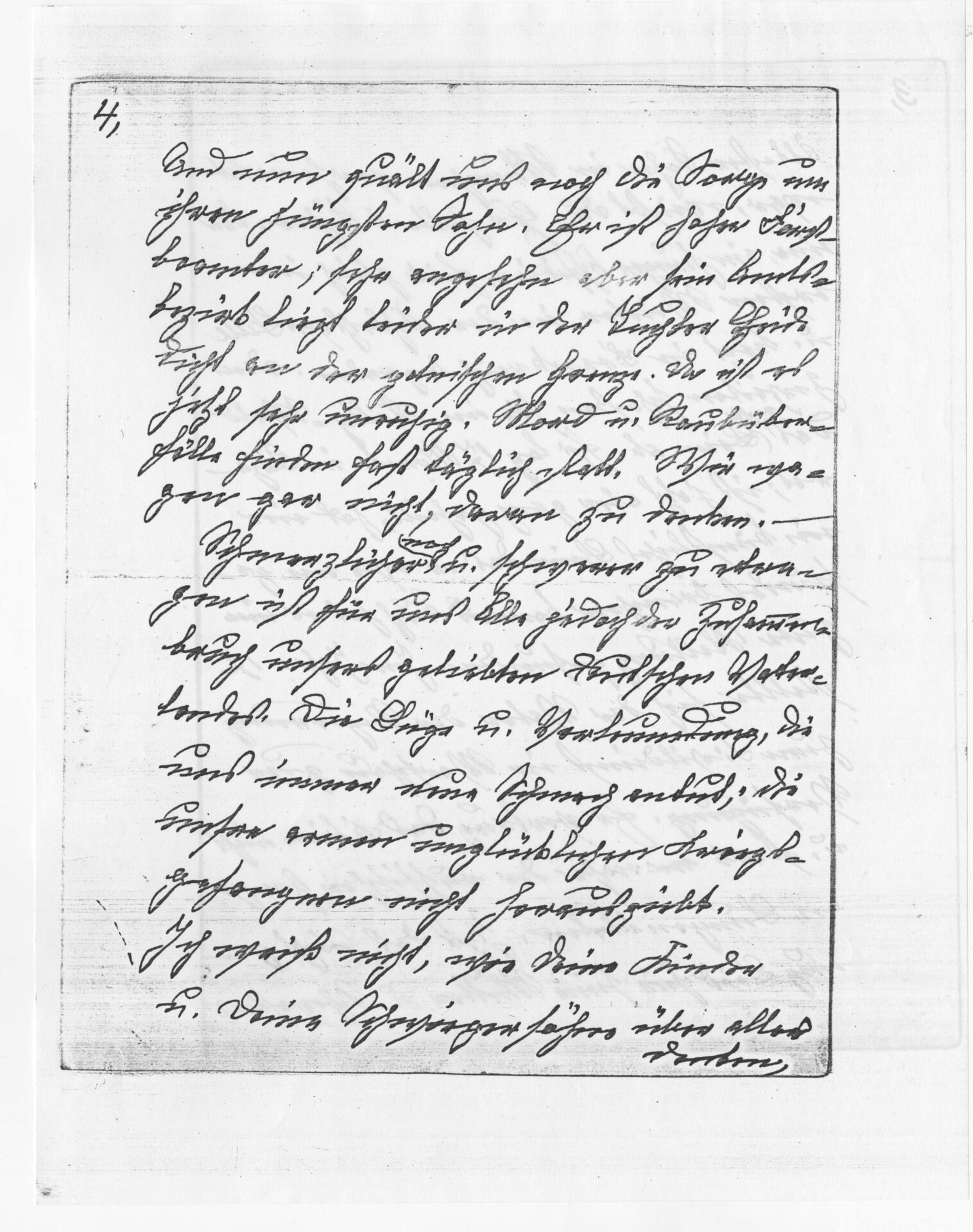 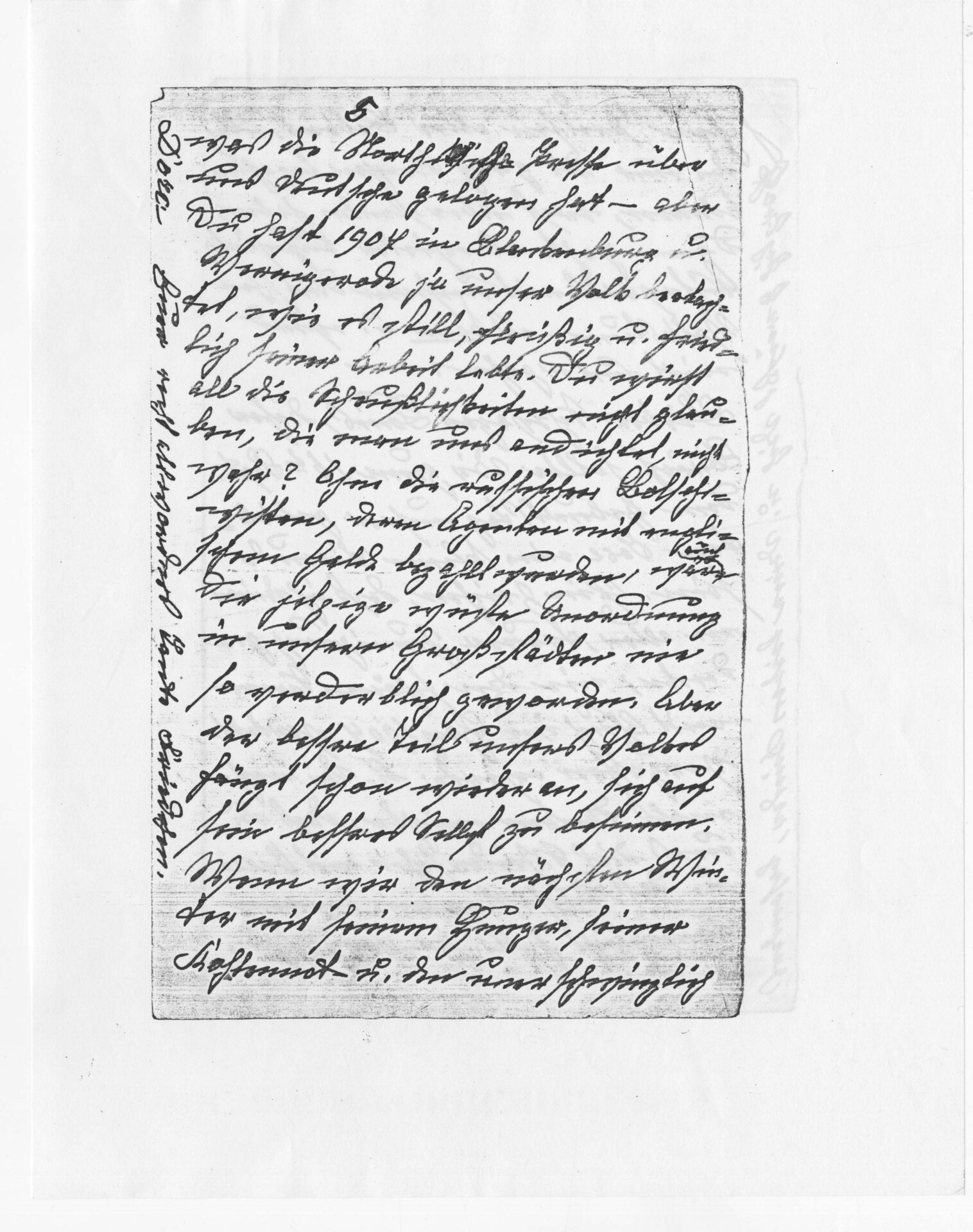 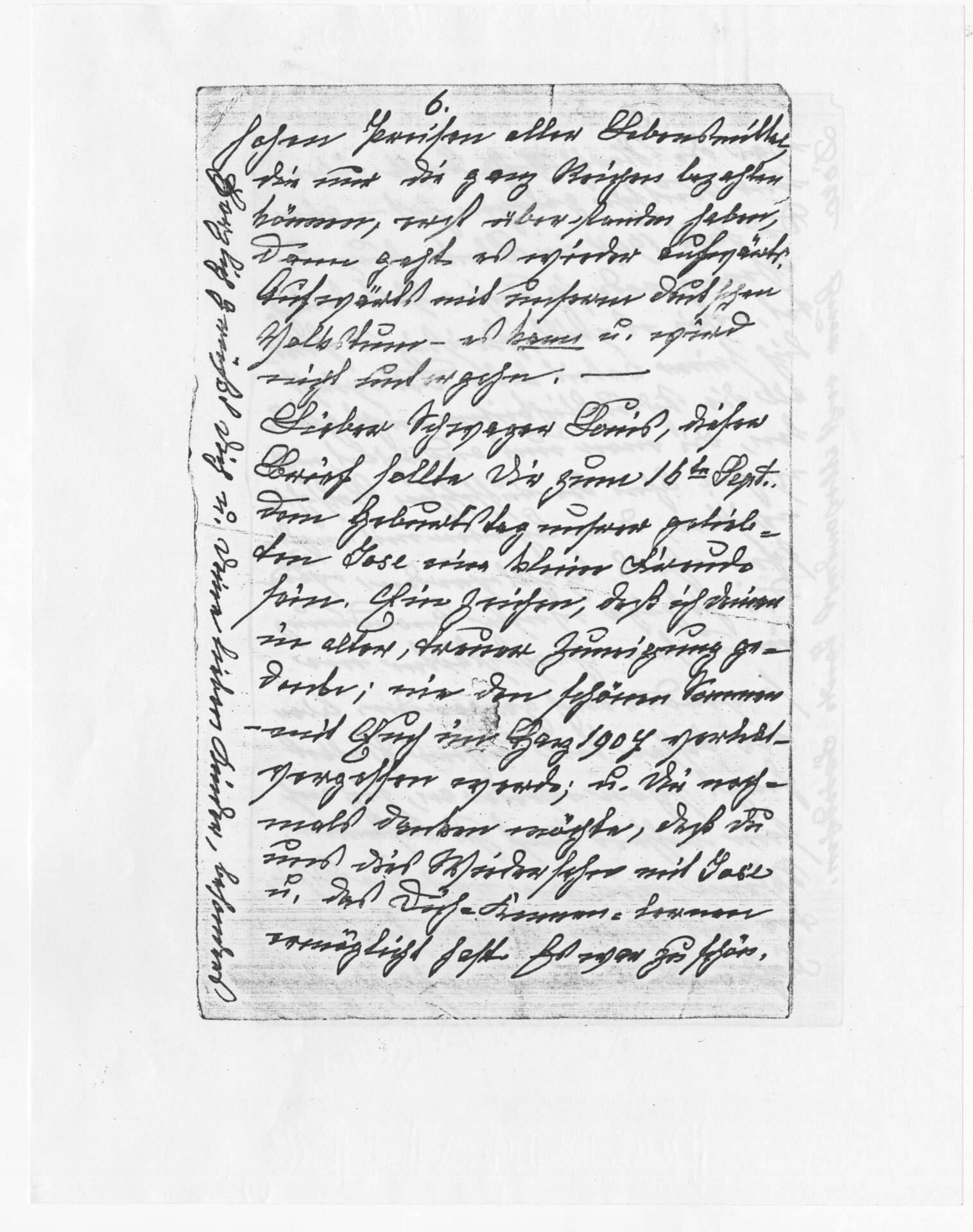 53,677 letters arrived in Hamburg with the first mail ship from America. I wonder if there is one from you that tells us that you are alive and that you and your children are well? What a great joy that would be! We haven’t had any news from each other for years. Since we have not received a letter from you, you will not have received ours either.

But maybe you will write to us again now how have you have fared in the meantime? Hopefully well. Your dear grandchildren have grown up, Theddy must already be a young man? Alma maybe even married?

Of us (Sister Auguste, Frieda and me) I can report pretty good things to you — as far as our health is concerned. Sister Auguste bears all the suffering that the disastrous war has brought upon our family bravely and resignedly. She is 84 years old and weak, but not sick. Her

eldest son was married in Munich, as you know. He had 3 sons. One, a young officer, died in the Battle of Lille in the very first winter and is buried in France. The second was shot in the right leg in the Ailly forest. He was in the hospital for 17 months; but is now completely healed, and has a prosthetic leg that he can use like a healthy one. He has also found a good position. In ’17 the father volunteered for civic service in Warsaw. He couldn’t handle the climate and died of bleeding in the lungs near the Russian border. Isn’t that enough suffering for his mother and sister?

And now we are still worried about her youngest son. He is a senior forest official; very well respected but unfortunately his jurisdiction is located in the Tuchler Heide close to the Polish border. There is a lot of unrest there right now. Murder and robberies take place almost every day. We don’t dare to think about it. —

Even more painful and difficult for us to endure is the breakdown of our beloved German fatherland. The lies and slander that continue to dishonor us; preventing our poor unfortunate prisoners of war from being released. I do not know what your children and your sons-in-law think

about all the lies that the [?] Northoth’sche Presse [/?] has spread about us Germans — but you saw our people in Blankenburg and Wernigerode in 1907, how they quietly, diligently and peacefully went about their work. You won’t believe all the hideous things that are said about us, will you? Without the Russian Bolsheviks, whose agents were paid with English money, the current chaos in our big cities would never have been so pernicious. But the better part of our people are already beginning to remember their better selves. Once we have survived the next winter with its hunger, its coal shortage and the prohibitively

high prices of all food, which only the very rich can afford, then things will be looking up. Our German people will rise again, too — it cannot and will not perish. — Dear brother-in-law Louis, this letter is meant as a little joy for you on the 16th of September, the birthday of our beloved Jose. A sign that I remember you in old, faithful affection; will never forget the beautiful summer — spent with you in the Harz Mountains in 1907; and would like to thank you again for making it possible to see Jose again and getting to know you. It was too nice.

Warm greetings to you and your dear children, especially

Dora. Your Aunt Friedchen who has grown pretty old.

Letter from Frieda Amerlan to Louis Benecke, the widower of her sister Josephine Amerlan, September 1, 1919. This was evidently her first letter to her brother-in-law in several years and describes the consequences of World War I for the Amerlan family in Germany. 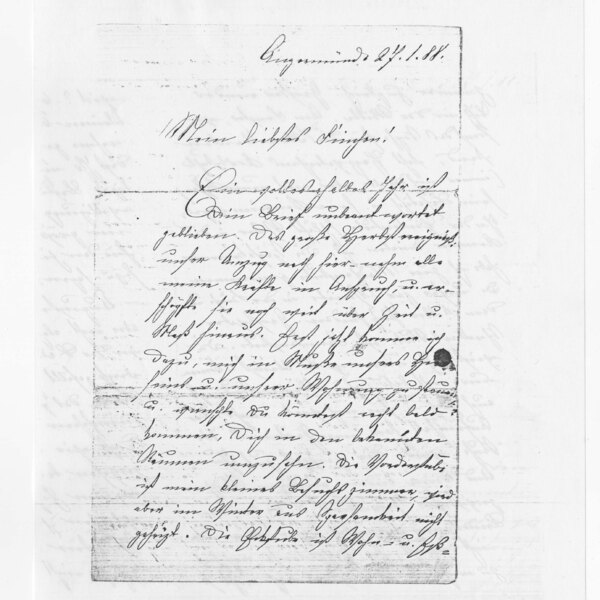